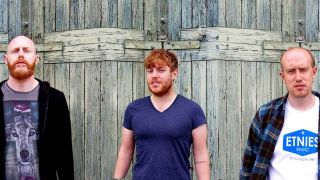 “Our sound sits in the centre of a four-circle Venn diagram of the musical tastes of each member,” says Massacres guitarist Kris Mayzee.

“It’s like Reuben, Every Time I Die, Dillinger Escape Plan and Slayer drinking at the same party, keeping well clear of all the gluten-free nibbles and having a great fucking time.”

This London-based quartet are about to become a must-see attraction. The songs on recently released debut EP Brutus (“Named after our drummer’s old dog that perished at the hands of a bastard!” says Kris) deliver a blend of brute force and smart surprises, most notably on vicious debut single Everything I Want To Do Is Illegal, while the band’s live shows are becoming the stuff of legend, not least due to Massacres’ refusal to be restricted to the stage. Wear a helmet.

“The stage is used as little as possible,” says Kris. “If there’s a chair going spare, we’ll wear it. If there’s a candle lit, we’ll throw sambuca on it. We’ve been doing this for so long in different bands that fucks are no longer given!”

Brutus is out now via iTunes and all other platforms