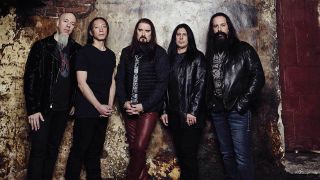 Peposterous. There is no other word for it. Even within heavy metal, where bombast, self-indulgence and voyages through the surreal and hyperreal are cherished tenets, the new Dream Theater album stands out like a kaleidoscopic monolith floating majestically in an ocean of grey slurry. More than two hours long, and underpinned by an elaborate story set 300 years into some monstrous dystopian future, The Astonishing fully lives up to its name. In fact, Dream Theater may have lost their minds completely…

“Ha ha! Yeah, like, ‘What the hell is wrong with you guys?’” grins guitarist John Petrucci, mastermind of The Astonishing’s concept and narrative, as he reclines on a sofa at their label’s London office, along with keyboard maestro Jordan Rudess and vocalist James LaBrie. “We often ask ourselves that question! As far as timing goes, it definitely felt right for all of us to do a concept album again. The last one we did was [1999’s] Scenes From A Memory. In order to do it right, we really wanted to do it to the fullest extent – have a full story, developed characters and not only write an album, but write a show that we can present. And it didn’t start small [and grow], it started off with the full, grand idea! Ha ha ha! That’s just the way we work. Nothing was haphazard at all. It was very thought-out and very detailed.”

You thought we were nerds? Check this shit out

“We’re still a rock band, though!” Jordan interjects with a wry smile. “It’s a little uncommon for every detail to be thought out in a rock band, but still…” “But we’re nerds at heart, right?” notes John, and all three explode into laughter.

Dream Theater, rounded out by bassist John Myung and drummer Mike Mangini, are fully aware of how they are perceived.

Throughout the last 30 years, they’ve managed to become one of metal’s biggest and most consistently successful bands, despite being, by all mainstream standards, desperately uncool. This time round, however, the gloves are definitely off. The Astonishing is not just an album: it’s a fully immersive story with its own screenplay, artwork and trading cards. It appears custom-built for future movie or stage show adaptations, not to mention the videogame market and, for maximum nerd points, the fantasy RPG world. It’s as if John Petrucci and his comrades are saying, “So, you thought we were massive nerds? Well check this shit out!”

“Ha ha ha! Yeah, that’s true, I guess. If you thought we were nerdy before, this will blow your mind!” laughs John. “As far as the RPG stuff goes, that would be the least of the influence. It’s not something tha I’m personally into, but I think it crosses over in the sense that we’re all into sci-fi and fantasy; we all love Star Wars, Game Of Thrones, Lord Of The Rings, any futuristic stories about the Apocalypse…”

“And even Harry Potter!” grins Jordan.

“Ha ha ha! Yeah, Harry Potter, too. We love all that. So if anything, this grandiose way of looking at things comes more from movies. Whether it’s progressive music as a genre, gaming, sci-fi as a genre… it’s a very similar headspace for all of those. It’s for people that love storytelling and diving into the detail, the methodology of it all.”

Instead, The Astonishing takes place in a world where societies have collapsed and been replaced by a feudal system: empires ruled by all-powerful leaders, with ordinary people reduced to cowed worker bees, striving for survival. Like many a sci-fi scenario, the album transports us to a dark and menacing time that is just plausible enough to ring true on some deep level. It certainly helps that some of the story’s principle supporting facts parallel what’s going on around us in 2016.

“The world [of The Astonishing] has returned to feudalism, the way it was when the aristocracy had all the money and the land and the power and ordinary people were just toiling,” John explains. “So that’s a little bit of a comment on what’s happening today and where things could potentially go. The other aspect is that in a lot of industries, robots are taking over and replacing humans, and so what would happen if that happened to the arts? In this future, with all this technology, in an effort to make perfect music, we make artificially intelligent machines – the NOMACs – that make music, and there’s no need for humans to make music anymore. So it’s about the juxtaposition of hearing these NOMACS making this really crappy nonsense music, because that’s what they think is good, and then hearing Dream Theater playing, with real strings, a real guitars, a real piano and a real singer…”

One of the more heartening phenomena of recent times has been the quiet but steady backlash against the disposability of much modern music and entertainment. A resurgence of interest in vinyl, box sets and immersive TV series that are consumed in huge, absorbing chunks, suggests that many people are rediscovering the joy of engaging with music and art, rather than merely using it as bland wallpaper to accompany other activities.

“It takes a certain mentality to listen to music,” Jordan states. “You’ve got to have patience or maybe just meditate. Everybody is more and more distracted, everyone’s multitasking… if you’re not looking at a screen, you’re being pulled away from it. It’s harder and harder to focus.”

“Music has definitely become a background for a lot of people,” nods James. “It’s not necessarily something people are listening to, and it could easily be a NOMAC in the background just making sounds while they’re texting their friends. Everyone is so inundated with so much media these days. There are too many distractions, whereas when we were all growing up, it was something to look forward to – you’d go and get that album and you’d sit with it the whole weekend and you’d keep spinning it, because you didn’t have all those distractions. This album is very relevant to that and what we’re seeing happening right now. It could easily go that way, right?”

“One of the things that we find more and more is that yes, there is a pop culture and yes, there is pop music, but there is a huge community of likeminded people who love to dive into things and want more substance,” adds John. “The people who love Star Wars and the mythology, that’s a huge community. It’s a matter of tapping into that and trying to do something that brings all those elements together. Ourselves as music fans, we’re like that. Dream Theater fans in general are like that. But to combine it, most musicians I talk to, you mention Game Of Thrones and they’re like, ‘Oh my god!’ but it’s the same headspace, you know? And so we’re trying to bring it all together.”

The great irony of Dream Theater’s approach to making music has never been more obvious. As The Astonishing combines elements that Game Of Thrones, Star Wars, Lord Of The Rings and even World Of Warcraft people will recognise, it should exert an allure beyond anything the band have achieved. But prog metal of this particular hue is routinely sneered at by some music fans, as if one kind of flat-out nerdiness is acceptable, but another is beyond the pale. Luckily, Dream Theater don’t particularly care and, more importantly, they are in this for the long haul. The release of The Astonishing is just the beginning: as people start to explore the band’s newly minted future world and dive into the vivid intricacies of music and narrative, the first of a series of intimate live shows, where the album will be performed in its mind-bending entirety, will be taking place in London on February 18. It will be augmented with a full movie presentation; a grand, extra layer of experiential substance.

“We have a lot of special things planned, if they all happen!” John beams. “Besides our lighting engineer and set designer, we have another group of people in Montreal who specialise in this kind of immersive stage experience, a transformative experience using video, so it’ll be a combination of a physical set and video panels. It will almost be like a full movie that we play along with. So you get your popcorn, and you find your seat, and then you’re listening to us play and watching this visual experience at the same time. It should be fun! We have high expectations, so I hope we pull it off, ha ha ha!”

“People have become disconnected,” notes James. “I guess we need to help to re-educate people – that it’s OK to sit down with one thing and immerse yourself in it. It’s one of the great joys in life.”

“You know what? We know we’re asking a lot!” John laughs. “We really are. It’s one thing to say, ‘Check out this 20-minute song!’ because fortunately we have a lot of people who like that kind of thing. But, ‘Put aside a couple of hours to listen to this album’? Ha ha! We romanticise the idea that people will sit down like they’re watching a movie and enjoy the whole thing from beginning to end, but we keep laughing about it, too, like, ‘Hey dude, have you heard the new Dream Theater album?’ ‘No, dude, but I’ve set Saturday aside…’ Ha ha ha!”

In 2285, the tyrannical Emperor Nafaryus rules over the north-east area of a futuristic, divided new US (now known as The Great Northern Empire Of The Americas). This dude is most definitely a Bad Egg. In fairness, he’s called ‘Nafaryus’, so he was a bit doomed from the start.

Our hero of the story, Gabriel lives in the small, isolated village of Ravenskill, forced to toil under Nafaryus’s rule. He boasts the now-rare talent of musicianship and a great voice to match, and so is officially anointed The Chosen One. It’s his job to kick Nafaryus’s ass. No pressure there, mate.

Arhys is Gabriel’s big bro and his biggest supporter. As the head of the rebel militia, Arhys wants to overthrow the Emperor and give his eight-year-old son, Xander, the life he dreams of. Arhys is kinda like Gabriel’s hype man, educating the townsfolk of his amazing powers.

Nafaryus may be a bell-end, but his daughter, Princess Faythe, is actually quite nice and bang tidy to boot, and after witnessing Gabriel strum his guitar (not a euphemism), she develops a bit of a crush on our hero. As you can imagine, this doesn’t go down well with her dad.

Crown Prince Daryus is Nafaryus’s son and a rather more broody character than his lovely, pink-haired sis. Sadly, he inherits his father’s rather prominent trait of being a massive twat, which creates even more turmoil in the blossoming romance between Faythe and Gabriel. Dick.

The Astonishing is out now, via Roadrunner, in a range of formats. See www.dreamtheater.net