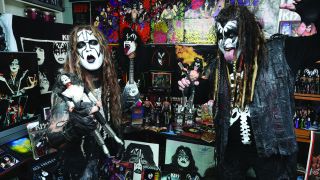 Chris: “When I was a kid, my friend’s older brother had a Kiss poster in their bedroom. It was of Gene Simmons on a chopper. I have that poster now, by the way. I remember being so transfixed by that poster and from there, I just had to start collecting whatever they had.”

Randy: “I started in grade school. My uncle had Destroyer on 8-track, and that was about it. Once I heard that, I was immediately interested and I started looking for all the stuff they had. The cool thing about Kiss is that the records all came with little Love Guns and posters, stickers, tattoos, booklets and all kinds of stuff – stuff that later became collectables.”

Chris: “I have all four of the Mego dolls they released in 1977, which are super awesome. My 70s Destroyer lunchbox is pretty insane and I have tons of epic posters from the 70s, along with the vinyl, the Kiss cards and all this other stuff.”

Randy: “The comic book that was printed in real Kiss blood – at least that’s how it was advertised – and just to have that was amazing! I’d be thinking, ‘I have Kiss blood in my hands! So cool!’ Ha ha ha! I used to have a little Kiss guitar when I was a kid, and that was my prized possession, but I don’t know what happened to that.”

IS THERE A HOLY GRAIL OF KISS COLLECTABLES OUT THERE?

Chris: “It would be cool to have one of Gene Simmons’ basses, maybe, but I really enjoy the old stuff – the stuff that looks old and that reminds me of being a kid and having that sense of wonderment when I’d find some cool new collectable. That’s what I’m always searching for.”

Randy: “If I had one of Ace Frehley’s smoking guitars with the pickup that turned into a little smoke bomb, that’d be a dream come true.”

EVER MET ANY OF THE KISS GUYS?

Chris: “I’ve been next to Gene before, but Gene is my hero, so I’d never say, ‘Oh my gosh, I’m a huge fan!’ because I’m always worried that their reaction might ruin the legacy. So I’m hesitant like that around all of my heroes.”

Randy: “I was working in a toy store one time and Paul Stanley came in, looking at Star Wars stuff with his kid. I was like, ‘Holy shit, that’s Paul Stanley! What do I do?’ I’m sure everybody who sees him wants to go up and talk to him, but he was with his kid, so I just walked over and said, ‘Hey Paul, if you have any questions, let me know. I’m a big fan.’ He turned around, gave me a big smile, shook my hand and said, ‘Thanks a lot, man! I really appreciate it.’ We talked for a bit, he bought some Star Wars stuff and that was it. That was pretty awesome.”

DIMEBAG DARRELL WAS BURIED IN A KISS COFFIN. NOT TO BE MORBID, BUT IF YOU COULD PICK ONE THING TO TAKE WITH YOU, WHAT WOULD IT BE?

Chris: “I’d take my Kiss New York poster and I’d wrap it around me because I’ve stared at that poster for hours and hours and hours of my life and I still do! I never get sick of it.”

Randy: “The cards, because I’ve lost them, recollected them and they’re just something that I look at that always gives me joy. So I’d throw those in there with me for safe-keeping in my journey into the afterlife.”

*BLACK WIDOW* IS OUT NOW VIA ATLANTIC