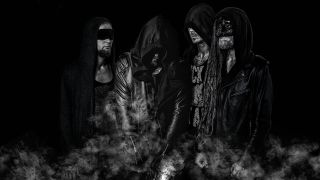 “As you get older, you start liking different things – and sometimes, despite your original intentions, you end up moving in the opposite direction.”

For former Suicidal Romance frontman Dmitry Darling, the realisation that he was deriving more pleasure from his side-cum-studio project inspired him to heed these persistent thoughts. The creative end result was Freakangel – and now this Estonian four-piece are demolishing genre boundaries with their mix of blackened industrial, venom-laced vocals and crushing rhythms. New album How The Ghost Became is the latest step in their evolution – moving away from their EBM roots into bona fide metal territory. “When we started, we were playing dark electro but with everything else except drums,” recalls Dmitry. “The aim was to combine everything we liked to do live – to bring that sound to people who couldn’t be at our shows. It took us almost three years to find the sound we wanted, but I’m really pleased with how it came out.”

Dmitry’s much-improved vocal delivery resonates throughout HTGB. “I didn’t like how I sounded back then – distortion wasa disguise,” he explains. “There’s nothing to hide here now, though – it is what it is.”

Lyrically, he continues to wears his black heart on his sleeve. “I’m still kinda emo,” he chuckles. “I’m getting older but I’m still ‘live and laugh’. Destructive emotions were the main concept behind this album, for sure.”

Their new sound might be more Manson than KMFDM, but current single In The Witch House, with its nightmarish soundscapes, dense reverb and gloriously dark visuals, reminds us that they’ve never been shy of sonic exploration.

“In choosing this track for the video, we wanted to show that we’re not afraid to be a bit different,” the frontman adds. “We’re combining two styles – metal and witch-house – the latter of which I’ve become pretty addicted to – along with the latest Motionless In White stuff!”

Despite their increasing fame, Freakangel’s ambitions remain humble – they’re just stoked to continue sharing their aural drama. And we’re ready to get our freak on.

HOW THE GHOST BECAME IS OUT NOW VIA DIGITAL WORLD