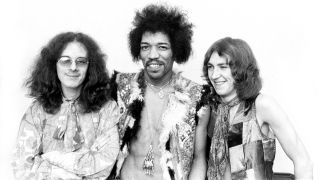 By 1969 Jimi Hendrix was a stranger in a strange land. His dilemma was that he had shot to fame with the white rock audience, playing with white musicians. At a time when in the US the Black Power movement was demanding action, and soul and jazz were making their presence felt in the mainstream, he felt utterly disconnected from what was going on in the black community, which never heard his records on their radio stations – unless they happened to be in Vietnam.

His first high-profile act of rebellion was to put together the expanded Gypsy Sun And Rainbows band to play Woodstock – an all-black outfit apart from drummer Mitch Mitchell. The band were too loose to undertake a September tour of Southern states, which Hendrix cancelled. He did, however, play a legendary set at a street fair held at 138th Street and Lenox Avenue in his old New York stomping ground of Harlem on September 5, 1969 in aid of the United Block Association, set up by his old friends, twin brothers Arthur and Albert Allen, aka activists the Ghetto Fighters.

The Allen twins persuaded him that a concert in the heart of Harlem would be a good move. The event was announced at a press conference at Frank’s Restaurant on 125th Street. “Sometimes when I come up here, people say: ‘He plays white rock for white people. What’s he doing here?’” Jimi told the New York Times. “Well, I want to show them that music is universal, that there is no white rock or black rock.”

Hendrix had approached Harlem’s famous Apollo Theatre to play there, but backed out when he was told he would have to undertake its standard week-long engagement. Instead he ended up playing on a four-foot-high wooden stage as the climax to a rambunctious block party. The event, hosted by Eddie O’Jay of local black music radio station WWRL, saw Hendrix play on a bill including Maxine Brown, JD Bryant and blues legend Big Maybelle.

Gypsy Sun And Rainbows turned up late so had the tough job of following Maybelle, who had local residents singing out of tenement windows. By the time Hendrix took to the stage after midnight the crowd had dwindled from 5,000 to a few hundred, some throwing eggs and catcalling, others marvelling at Hendrix in front of six seven-foot Marshall stacks. “This music might sound loud and funky, but that’s what’s in the air right now, isn’t it?” he said before he opened with Fire. Later he introduced Voodoo Chile as “the Harlem national anthem”.

“Seeing Jimi in Harlem, it was blazingly apparent that he has a new spirit,” wrote Chris Hodenfield in Circus magazine at the time. “He has that crazy-ass spirit that he had in Monterey, and his new, no-nonsense band means that we’ll hear some more drive and power and RESPECTING good music.”

It wasn’t to be. Gypsy Sun And Rainbows dissolved the same month after a shambolic downtown club appearance. Hendrix then formed the ill-fated Band Of Gypsys with basisst Billy Cox and drummer Buddy Miles. “He wanted a black band and a black drummer,” said Miles. “He wanted to get together with the roots, going back to what he really loved – soul, R&B and blues.”

Miles was instrumental in helping Hendrix finally make the direct connection with the black community that he was striving for. Alafia Pudim, of Harlem proto-rappers the Last Poets, was recording in the same studio where Hendrix was working with the Band Of Gypsys. Pudim turned up early, intending to record a street story about a pimp and his doomed hooker they knew. Miles, who was playing on Pudim’s session, helped to get Hendrix to play on the track. Jimi responded by uncorking some understated liquid guitar. The resultant 13-minute jam, Doriella Du Fontaine, would eventually be released in 1984.

Alafia Pudim believes Hendrix wanted to change. “He was trying,” he says. “He was out of contact with his people. He had alienated them – not on purpose, but he got swept along by his popularity with white people. I taught him the Black Power handshake because he didn’t know how to do it. All the brothers knew how to do it but Jimi didn’t.”

It was a fleeting union. By early 1970 Hendrix was back with a reunited Experience, playing to thousands of mostly white rock fans. But the success of bands he inspired, such as Funkadelic, showed that his efforts had not been in vain.

“Jimi Hendrix was the cat that said: ‘Not only can you play guitar, I want you to come up front and do the wild thing,’” says ex-Funkadelic bassist Bootsy Collins. “Back in that day, brothers weren’t cool with being freaky and being out there like that.”