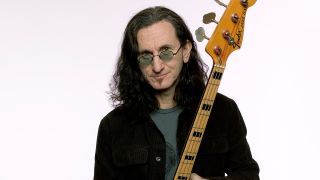 Born in Willowdale, a suburb of Toronto, 62 years ago, Geddy Lee has been a member of Rush for almost half a century, contributing bass, keyboards and those often alarmingly high vocals.

On the day we meet him, the apparent retirement of the group’s drummer, Neil Peart, goes viral, and Lee is forced to clarify once again that Peart no longer wishes to tour. But he’s aware that Rush cannot go on forever.

You were born Gary Lee Weinrib. How did Gary become Geddy?

My mum has a thick Polish accent. When I was twelve a friend often came to the house. He thought she was saying ‘Geddy’ but it was how she pronounced her Rs. My friend said: “I think Geddy is cooler than Gary. I’m gonna call you that from now on,” and it stuck.

It was fairly dull. I was a quiet and nerdy kid. My dad passed away when I was twelve and I started running around with a bad crowd that included a fellow named Alex Lifeson. He introduced me to marijuana and we started playing in a rock band together. It all went downhill from there.

I was a daydreamer. My report card usually said: “Works well with others but doesn’t apply himself.” I was a classic underachiever.

Your parents were Jewish holocaust survivors. That must have affected your outlook on life?

Probably so. My mum told me a lot about the camps. She brought to life a lot of the horrors she had experienced, and it gave me a real perspective on what she’d gone through. It gave me, I believe, a lust for life and a desire to make the most of the time we have.

You don’t have the most traditional voice. Was it difficult to be accepted as a lead singer at first?

Yeah, it’s definitely a polarising factor. I’d sung in choirs at school and had a natural soprano voice, and the bands we were listening to when we started Rush – Humble Pie, early Zeppelin – had singers with high ranges, so I emulated them. It’s definitely a love-it-or-hate-it voice, but as I’ve gotten older I think I’ve become a better singer.

What would we find on your CV in the section of hobbies and pastimes?

I’m a bird watcher. I photograph wildlife. I love going on hikes with my wife. I’m big on fitness – I’m in the gym four times a week. I play tennis and I’m a huge baseball fan. And I collect wine. I collect it here [taps his stomach and laughs].

When was the first time you ever got drunk?

What are the ingredients of Panther Piss?

It’s what happens when you go to your parents’ liquor cabinet and take a little bit from each bottle. You mix it all together and, hey presto, Panther Piss.

Property aside, what was your biggest financial indulgence?

My wine collection is pretty expansive – and expensive.

I’m trying, but I’ve only got one mouth. When you get into fine wine you’re told to get as much of the good stuff as you can and consume the rest – that pays for your drinking. That’s the theory. I just cannot part with some of the best bottles.

Which wines would your bandmates be?

Alex would be a Zinfandel – overripe and highly alcoholic. And Neil’s a claret – one that needs ageing, softening up around the edges.

I cry on every airplane journey when I’m watching a movie. I’m a big softie – especially at altitude. But here on terra
firma I sometimes well up when I see videos of my eighteen-month-old grandson.

What can Geddy Lee do that nobody else can?

I can wiggle my ears and my nose at the same time. But I’m not going to demonstrate. Sorry, you’ll just have to trust me.

As you get older, do you find you think more about death?

Yes. Every once in a while it creeps into my subconscious. Not to the degree that Woody Allen obsesses over it, but my mortality is increasingly present in my thoughts.

Do you believe in a God of some kind?

No. God is an underachiever.

So much wine, so little time.