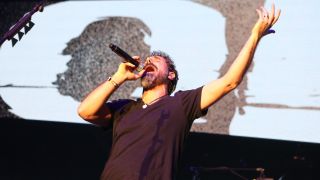 The Zombie Jesus celebrations are over and its time to step back into the real world. A world full of blast beats, guitar solos and breakdowns if this smorgasbord of shows has anything to do with it!

Easter Bank Holiday Massacre: Aberdeen, Downstairs, Monday 6th April You’ve stuffed yourself full of chocolate to the point you want to be sick, Jesus has returned, or gone again (we’re not keeping up), and it’s nearly time to face the fact that we’re all back to work. The Easter Bank Holiday isn’t quite over yet though, see it off in fine style with an evening of death metal. Headlined by Abaddon Incarnate, with support coming from Basement Torture Killings and Oh Daith, it’s sure to be better than any amount of Mini Eggs.

Gurt: Cardiff, The Moon Club, Thursday 9th April London’s self proclaimed ‘filthiest party-doom bastards’ Gurt hit Cardiff’s Moon Club this week in support of new EP D.I.Y.M.C.A. Taking a classic ‘70s blues sound and drenching it in in sludge, expect a show that is every bit as fun as it is dirty – kind of like Andrew WK chasing pigs around a muddy pen.

Satyricon: Manchester, Sound Control, Tuesday 7th April One of the most important, and arguably best, black metal bands Norway has given the world make a long overdue return to UK shores this week. Get yourself along to Sound Control this week in order to witness Frost and Satyr in all their dark glory.

Obey The Brave: Birmingham, The Flapper, Thursday 9th April We love a good beatdown – let’s face it, who doesn’t? Which is why we suggest heading to The Flapper this week in order to get a healthy dose of meaty riffs and sweaty pit action courtesy of Canadian brawlers Obey The Brave. Making this night even better, support comes from UK upstarts Malevolence and Napoleon.

Benighted: Bristol, Exchange, Sunday 12th April Flying the Français flag for death metal, Benighted have been getting heads banging for 15 years now, with seven albums to their name. In support of last year’s brutal Carnivore Sublime, the Saint-Étienne four-piece head across the channel this week to take faces off at Bristol’s Exchange.

System Of A Down: London, Wembley Arena, Friday 10th April WAKEUP! GRABABRUSHANDPUTALITTLEMAKEUP! To say we’re excited for a show by everyone’s favourite Armenian American metal lunatics would be an understatement. Making a rare appearance at the massive Wembley Arena as a part of Wake Up The Souls world tour, this has a serious chance at being one of the best gigs of the year.

Evil Scarecrow: Belfast, Voodoo, Sunday 12th April With a unique look, songs about robots and giant crabs and their own beer, it’s very little surprise that Evil Scarecrow are constantly winning over more and more people. After blowing minds at last year’s Bloodstock, the face-paint covered Nottingham five piece play Belfast’s Voodoo this Sunday, with a show that will be nothing short of a metal good-time bonanza.

Skeletonwitch: Dublin, Voodoo Lounge, Sunday 12th April We’re very happy to see that the Ohio thrash heroes have hit the road once more. Even more happy when we see that they’ve only bloody gone and brought Goatwhore along with them! With these two bands sharing a stage expect things to get very, very heavy.