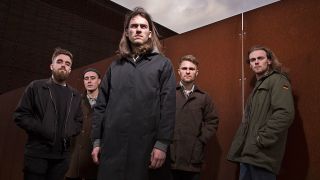 While studying Music Production at Leeds University, Koyo’s Jacob Price got a master class with veteran engineer/Bowie producer Ken Scott, who let him in on a little rock’n’roll history. “Ken played us the stems of Hunky Dory and Ziggy Stardust,” says the keyboardist/programmer. “By the end of Five Years, Bowie is just crying. It’s a proper performance that feels like a one-off take. And it’s that kind of thinking we’ve tried to bring to our band.”

Some big names are being hurled around in the effort to describe Koyo’s dramatic, widescreen sound, biggest among them being Pink Floyd. “Maybe people hear Floyd because we’re on the more textural side of progressive music,” offers vocalist/guitarist Huw Edwards. “That whole Dream Theater, shredding thing isn’t what we’re about. We like bands that give you the impression they could really take off if they wanted to, but are holding a little back. For us it’s really all about the song.”

The ‘progressive’ tag isn’t the albatross necklace it once was, and the band embrace Opeth, Mogwai and Tame Impala as influences. There’s something fresh and almost hip about the layered swathes of guitar and electronica on Koyo’s forthcoming self-titled debut album. It’s a rich, psychedelic and highly melodic blend of post- and noise-rock, given panoramic scale by their nu-prog leanings. Towering first single Tetrachromat (Parts 1 & 2) gives credence to the Floyd argument, but then comes the oddly funky follow-up Lost In The Kingdom, inspired by Paul Simon’s Graceland. King Crimson and the Mars Volta collide on Ray Of Sunshine, Now I Understand points to Mogwai and even Sonic Youth, and Koyo’s synth-spangled swirl of guitars often evokes My Bloody Valentine in their Loveless pomp.

Born in the 90s, lifelong friends Price and Edwards grew up in Kettering, and absorbed their dads’ record collections – Floyd, Sabbath, Hendrix, Zeppelin. The first gig Price saw was Rush in 2004 (he was just nine); Alice In Chains’ melodic approach in particular rubbed off on Edwards, who studied Music Performance in Leeds. Formed there in 2015, Koyo (it’s the Japanese word for the changing colour of leaves in autumn) grew from an acoustic album the two started that spiralled into a fully fledged band project. They added bassist Dan Comlay and drummer Tom Higham, whose jazz background adds another stylistic element to their intoxicating mix.

Koyo have played only a handful of gigs to date, and the recent addition of second guitarist Seb Knee-Wright has added tantalising heft to their live sound. “Seb’s really into grindcore,” says Price. “He’s really brought that dynamic in, so now we’re grittier and more powerful, caked in distortion. It’ll be interesting to see where we go next.” It really will.

Koyo is released on August 4 via 88 Watt

“People have said they hear Pink Floyd in us,” singer/guitarist Huw Edwards says of Koyo. “We’re huge Radiohead fans, along with Mogwai, Opeth, My Bloody Valentine. But you know that beautiful chord progression on Led Zeppelin’s Down By The Seaside, from Physical Graffiti? That’s the sort of thing we’re really aiming for.”