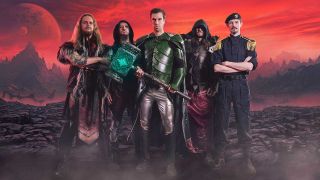 Anglo-Swiss power metal titans Gloryhammer are about to embark on a mammoth European tour, bringing their third album Legends from Beyond the Galactic Terrorvortex to expectant fans the length and breadth of a rapidly disintegrating continent.

To celebrate this momentous trek, we asked Gloryhammer founder Christopher Bowes, a.k.a. keyboardist Zargothrax, to guide us through the UK leg of this epic journey, which kicks off in London on October 18 - full dates below.

To the untutored eye, London may appear a sleepy mountain village. But beneath the surface lies a most appalling den of iniquity! Harlots, thieves, fools and falsifiers – these are the piteous mortals that choose to make their home in such a god-forsaken dump. Of course, I condone all such behaviour, and if lawless drinking until the sun rises is your thing, I can think of no better place.

Magnificent, untarnished Manchester! Known by all as the Jewel of the North, and with good reason; the city is hewn of crystals and inhabited by noble, kind beings of pure light. The local cuisine is famed for exotic and fiery spices – the very same fire I would like to rain down upon the place, until nothing but ash remains. Hahahaha!

Legend tells that countless aeons ago, The Hootsman once made his home in a foul hovel somewhere near the swamps of Bristol. In this odious shack he would spend his time cursing and drinking a baleful concoction of rotten apples until he was inebriated enough to rise at sundown, terrorising the locals until collapsing and sleeping where he fell, only to begin the process again at dawn!

Home to an industrious species of goblin, mole-like in their visage. They're particularly fond of a peculiar kind of beer known as 'real ale' – best described as condensed and distilled smog, the same smog that billows from the chimneys of the countless factories that I've conscripted them in to construct my nightmarish war machines! Loyal, devoted goblins. I love goblins!

Everyone has heard of Robin Hood, but there's far more to Nottingham than silly little children's tales. For example, many places claim to be home to the oldest pub in the world, but did you know that Nottingham takes credit for the oldest known pub in the universe?

And not just this universe – in every conceivable dimension, multitudes beyond mortal comprehension! A most impressive fact indeed, and one that surely makes up for the fact that it's actually rather cramped inside.

This isn't in the United Kingdom at all – who's responsible for this article?! I'll have their heads presented on a stick... Oh, it's me. Nevermind, I should have an amnesia hex lying around here somewhere, if I can just find that scroll...

A repugnant, squalid hole in the ground populated by pustule-ridden peasants! Glasgow was one of the first cities I laid siege to after escaping through the wormhole, and with good reason – it's awful!.

"The simpletons that reside here are so violently passionate about supporting their champion athletes that they've invented a whole new sport around it – total destruction of the opposing zealots teeth by use of any means necessary! Stupidity on a molecular level, and all the more remarkable for it.

At long last, Mighty Dundee is mine! I can't keep count of the times I've had to tangle with that bug-armoured buffoon, Angus McFife, over it. Waving around that ridiculous oversized hammer like it'll impress someone! Although my spies tell me that he and his cohorts are planning to advance on it at this very moment, as the seasons change. We'll just have to wait and see...