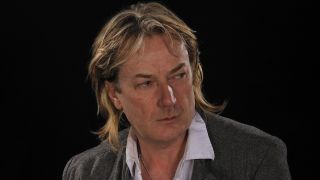 Geoff: It has been an extremely busy year for me with extensive touring for both Asia & Yes. Sadly we lost my dear friend and collaborator John Wetton, so the Asia shows with Journey were particularly poignant. In between these tours I managed to team up with Chris Braide to work on our 3rd DBA album which has just been released and I’m proud to say, has had some spectacular reviews across the board. I also managed to get in some work with my old colleague Trevor (Horn), on Yes’s Fly From Here revisited, as well as some new Buggles material. Watch this space, folks!

Did you make any New Year’s Resolutions?

Geoff: I keep promising myself to slow down, lose weight, start working out and give up alcohol - the usual suspects. Somehow it never seems to pan out that way, but this coming year I am determined to see some (if not all ) of those resolutions come to some kind of fruition!

How do you view the state of the progressive music scene at the moment?

Geoff: I think it’s pretty healthy at the moment, and I believe the best is yet to come. It’s interesting now to see some albums charting on the main UK Official top 30 album chart, which is something that has not happened for some considerable years in the prog world as far as I am aware. Proper music will out in the end!

Geoff: As it’s the Yes 50th Anniversary, there promises to be a great deal of activity around that celebration in 2018. In February, Cruise To The Edge looks set to be one of the most exciting collection of bands yet, and subsequent to that, there is an extensive UK Tour (plus some European dates) for Yes. In amongst that, I also have a solo show on the inaugural HMS Prog cruise at the beginning of March. Then there is big US tour planned for Yes in June and July, and possibly some more Asia shows in the autumn. So yes, it’s certainly looking like another busy year ahead for me.

If you could achieve one thing for you or your band, absolutely anything, what would it be?

Geoff: Firstly, I would like to see John Wetton receive some kind of award for his amazing contribution to music over the years. Even posthumously, it would be most fitting for him to be recognised in this way, such as maybe, an annual award given to aspiring musicians. And as far as my own personal achievement wish-list, I would simply like my music across all of my bands, projects and collaborations to continue to be appreciated by my wonderful and dedicated core of followers.