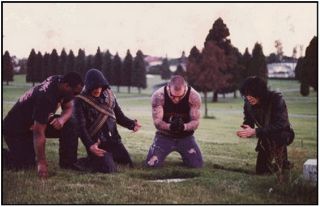 This Saturday, November 30, The Dome in Tufnell Park, London and Isengard Productions are going to be host to a night of extreme metal infamy as three legendary bands from across the globe – Blasphemy, Vulcano and Adorior – come together for a tempestuous show of profane and piledriving aggression.

Hailing from British Columbia, Canada, and having existed in various forms since 1984, Blasphemy were one of the key drivers – along with bands such as Von, Beherit Sarcófago and Mystifier – in pushing the nascent, still death-steeped black metal scene to primitive and brain-warping new extremes.

Proudly Satanic, swathed in bullet belts sporting names such as Nocturnal Grave Desecrator And Black Winds and 3 Black Hearts Of Damnation And Impurity, Blasphemy were determined to uphold the uncompromising ethics of black metal’s first wave.

Their 1990 debut album, Fallen Angel Of Doom.... lashed its chaotic, transgressive energy to a ritualistic and atonal tumult whose sense-overwhelming storm still blows through today’s occult-minded underground. Despite only having released one other full-length album, 1993’s Gods Of War, since the bands unholy blast has lost none of its all-ravaging power.

Equally essential, Brazil’s Vulcano were one of the country’s first bands to embrace the black metal wave. Their 1986 debut album, Bloody Vengeance, set the scabrous tone for the prolific black/thrash movement, all crazed, bug-eyed momentum, convulsive, electricity-overload lead breaks and a production that made it sound like a lo-fi field recording of cannibals on the loose.

Having left a trail of destruction through the late 90s and early 00s, notorious British mace-in-the-face black metallers Adorior have returned from a long live hiatus, and fronted by the fearsome Melissa – Jaded Lungs, their full live comeback is a cause for celebration and outright moshpit carnage.

If you want to experience extreme metal in its most essential, committed and uncompromising form, strap on your studs and get down to the Dome this Saturday for what’s guaranteed to be an unmissable show of force!

And get your tickets here!