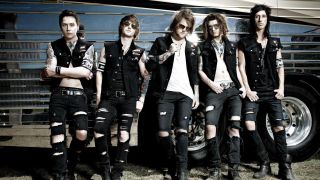 York’s metalcore scene-stealers Asking Alexandria hit the road in the States this summer on the Mayhem tour, sharing a stage with the likes of Korn and Avenged Sevenfold. But before that, they've some heavy, angry, pissed-off new songs to record...

What are you expecting from Mayhem?

“I’m really looking forward to it. We did it in 2012, and it was amazing. I remember a lot of drinking and I remember a cornhole competition. The finalists were myself and and Sid from Slipknot, and I kicked his ass!”

What the hell is cornhole?

“It’s some weird American game. You have two boards set a fair distance apart. There’s two of you per team and you have to chuck a beanbag onto the board for one point or through the hole on the board for three points. It’s a good drinking game.”

Was Sid a gracious loser?

“Yeah, he’s good fun, he didn’t mind. He gave me his wrestling belt as a prize.”

Do you know any of the bands on this year’s tour?

“One of the reasons we’re most excited for Mayhem this year is it’s a big friends festival. Some of our best friends in the world are in Avenged Sevenfold, the Trivium guys, the Korn guys, we’re friends with everyone on our stage. Then on the other stages we’ve got friends like Suicide Silence, Miss May I, so I think it’s going to be quite a messy summer.”

You say you’re friends with all these bands, but is there a part of you that wants to blow them all offstage?

“It’s really hard when you become friends with them and it’s also really hard when you’re competing with amazing bands like Korn and Avenged Sevenfold. I think we all just go out to have a good time, there really isn’t any kind of competition. It’s kind of just a big incestuous love-fest.”

What have you got planned production-wise?

“The first time we played Mayhem we were on the second to main stage, so there wasn’t much space, but this year we’re the third from headlining band on the main stage, so we have a nice big stage to work with. So we’re going to bring a bunch of production, like we’ve got the vending machines that go along with our album cover that are full of blinders and staircases and ramps, CO2 cannons and all that stuff. We’re pro now!”

Have you been writing new material?

“Actually yes. Joey Sturgis our producer is flying out to join us today. We have a recording studio built into the back of one of our buses. We’ve been writing on the road, so he’s going to come out and record pre-pro with us over the next few days on tour, and then we fly to Arizona for four days to record four or five new tunes. We’re re-releasing From Death To Destiny this summer, and it’s going to include four or five new songs, and we’ll be releasing with it the Live at Brixton DVD we shot.”

What can you tell us about the new songs?

“They’re heavy as fuck. I think our label’s a little bit nervous because they’re so heavy! They’re like, ‘Wow, you guys sound pretty angry on these songs’. Yeah well, we’re tired, we want to go home, you’re putting us out on the road so we’ve written some pissed off tunes.”

Are you burnt out?

“Oh, I’m so tired. I got married coming up to a year ago and I haven’t had a honeymoon. I believe we’ll get a break after we’ve done this Asian, South African run. We’re supposed to have a month off, but I just started my record label, so I have to go on the Warped Tour to promote it and support one of the bands [Scare Don’t Fear] we’ve signed.”

How do you avoid getting jaded with it all?

“I love my job. That’s the only way. I am tired and I do get grumpy and I do miss home, but I get to wake up in a new city every day and meet new people every day. I have to just keep reminding myself that this is a dream job. People try their whole lives to get the opportunity we’ve been presented with.”

Is being away from home the lyrical theme of these new songs?

“They’re kind of even more specific and angry than that. A lot of hatred has been poured into these songs. I don’t know why, we’re not very hateful people, but we do get pissed off and these are probably some of the most aggressive songs we’ve ever written.”

Asking Alexandria are nominated for Best UK Band at the Golden Gods. Vote for them here.