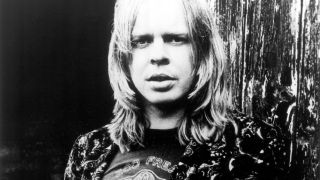 Rick Wakeman likes to keep busy. By the time Classic Rock arrives for our mid-morning interview he has already chauffeured his wife to Heathrow Airport, attended a business meeting in London and returned to his home in Norfolk (“I was so tired on the way back that I had to pull over and sleep in a lay-by”). By Wakeman’s standards this sort of activity is positively sluggish. At the height of his productivity in the 1970s the Yes keyboard wizard was combining his day job with up to 18 weekly sessions for artists as disparate as Black Sabbath and Des O’Connor (the obsessives among his fan base estimate that he has played on more than 2,000 tracks). And apart from when our conversation is interrupted by the Doctor Who ringtone of his mobile phone, he’s only too happy to tell us the stories behind them.

OZZY OSBOURNE: Yes supported Black Sabbath in America in the early days, and me and Ozzy always got on great. Because of my various alcoholic diseases, I haven’t been able to drink for 20-odd years, but back then I was a serious drinker, as were all of Sabbath, so we got on like a house on fire, matching each other drink for drink. When we supported ’em on Yes’s Fragile [1971] tour they had a spare seat on their private plane, so a lot of the time I’d travel with them. You literally couldn’t move for booze on that plane. Ozzy was probably putting away as much as me – which was as much as humanly possible.

Was Ozzy going off the rails when I worked on [1973’s] Sabbath Bloody Sabbath? I don’t think he was ever on the rails, was he? Actually, I think Ozzy is very clever, because he’s got this knack of appearing to be out of control, while actually being perfectly in control. I never saw him too wasted to perform.

He really showed his versatility when he did Buried Alive with me and the London Symphony Orchestra on 1999’s Return To The Centre Of The Earth. I asked him to do a track, he asked who it was with, and when I told him it was the London Symphony Orchestra and the English Chamber Choir he basically said – but in less polite words – “Bless my soul, that sounds a treat!”

LOU REED: We met when I did sessions for Lou Reed [1972] at Morgan Studios in London. Studio One was upstairs, and the control room was upstairs again from there. Everyone who was taking part waited down in the bar – not a difficult thing for me at the time. I think there was a different session going on in another studio, because Rolf Harris was also there, as was – for some reason – Ronnie Barker.

So you waited until you were called by Lou – a bit like a doctor’s surgery. Eventually someone came over and told me: “Rick – Lou is ready for you now.” So I went up, and the studio was pitch-black apart from a lamp on the piano. I put the cans on, and I hear Lou’s voice in my ear: “I’m gonna play you this track, and I want you to play piano real quick over it. Just make sure you play real quick.”

I played over a few song snippets, then he went: “Thank you. That was great.” I got up, the lights came on, and he came down, thanked me, and I walked out the door. It was an incredibly bizarre session. He was very pleasant to me, but I would imagine he could be a little bad-tempered.

MARC BOLAN: When I first met Marc he didn’t have a pot to piss in and neither did I. We’d go down to the Wimpy burger bar on Oxford Street, and whoever had money would pay for the Cokes. I think I did the Get It On session because I needed money for the rent.

I got on well with Marc. He was a very gentle man, and all the ladies wanted to mother him because he was quite a diminutive chap. But he had a fiery element to him too. I remember one time in 1970, when he’d had a massive row with his record company because there was a track he wanted to record, and some A&R person didn’t want it. So Marc decided to form a band just to record this song and get it out there. At midnight, we sneaked into the studio and recorded this track [Oh Baby] as Dib Cochran And The Earwigs. If you can find a copy, I know somebody who’d pay five grand for it.

DAVID BOWIE: When you were doing session work at that time, most artists would make you do 50 takes, and you knew damn well they were going to use the first one. David was the complete opposite when I worked on Space Oddity [1969]. I arrived at Trident Studios, sat down at the Mellotron, and after the first take he said: “That’s it.” I told him I’d only been there 25 minutes. But Bowie doesn’t waste time in the studio. He won’t have anyone learning parts in there, he thinks that’s taking the piss.

We became good friends, and shortly after that he asked me over to his house. He lived in Beckenham – everyone called it Beckenham Palace, way before Posh and Becks. I remember sitting in this room, while he took out this battered 12-string and played me the songs that ended up on Hunky Dory [1971]. I’d been doing sessions for years, but I’d never heard so many songs that were such winners.

Later on I went to see Bowie play a show, and he told me he wanted to form this band called Spiders From Mars, and he wanted me and Mick Ronson to run it. But it was the exact same day that I’d had a call from Yes. It was like being asked to join Manchester United or Chelsea. I took Yes, because within the Spiders David was always going to be the leader.

ELTON JOHN: You might be surprised that Elton didn’t lose his rag once during the recording of Madman Across The Water [1971]. I think the world of Elton, but he doesn’t suffer fools gladly. He’s got a very short fuse on that front, and I probably have too. Because when you’re trying to achieve something musically and somebody hasn’t done their job, it can really screw things up.

I actually knew Elton before the Madman… session. When Your Song came out in 1971, he did a concert at the Royal Festival Hall, and I was in the band playing Hammond organ. He was a bloody good piano player, but he never did like playing the organ.

I think his celebrity status is brilliant these days. I’d hang out with the Beckhams too, if I could. The thing is, he doesn’t have to hang around with them to get in the papers. I genuinely have the utmost respect for everything he’s done. And if tantrums are part of his make-up, then so be it.

JOHN ENTWISTLE: Back in the 1960s there were pubs where people would just get up and play, and my local was one of them. So I’d go down to the Red Lion – well underage, but it didn’t matter – and get invited up to play with all these great musos. John Entwistle lived just around the corner and he’d come down too. I was only 16 when we first met, in 1965.

We both got booked for some BBC sessions around that time, and became good mates. And later he came on my Gas Tank programme [Wakeman’s 80s TV chat show] and played a bass solo in the middle of this piece we’d knocked up. His solo in the rehearsal was good, but when it came to the performance he went up another six levels. Our jaws just dropped. And he was like: “Was that alright, then?”

I really miss John. I went to see The Who in Madison Square Garden two weeks after he died in 2002. I sat down with Pete Townshend and just said: “God, I miss the bugger.” He was a unique character, and he changed the face of bass playing.

CILLA BLACK: She came down to the session and called everyone ‘chuck’. She stayed in the control room, as I recall, and us humble musos were only allowed in the control room when you were invited. At the end she told us all – and I can’t do a Liverpool accent – “Thanks ever so much, chuck.”

I’ve met her a few times since, years later, but back then she did thousands of sessions, so she wouldn’t have remembered me. I don’t think it’s a bad thing that she became a presenter. I think she was very good as the host of Blind Date.

JON ANDERSON: The first time I saw Jon was when Strawbs supported Yes in Hull. We were the opening act, and I’d heard all about Yes, so after we’d done our bit I sat at the back and watched. Most singers back then were six-foot-three with greasy hair, and on comes on this diminutive little fella with an alto voice.

The press had a field day about our relationship, because I was a beer-swilling meat eater and he was a teetotal vegetarian. They’d make out that we’d fight tooth and nail, which was bollocks. I mean, we did have fierce discussions, and early on people often heard us screaming about something that had gone wrong, and the next day you’d read ‘Yes To Split!’ But it never got physical – he’s half my size. Jon and I did a duo tour last year, and we reminisced about the rubbish you’d read in the press. I mean, the number of times I read that Keith Emerson and I hated each other… Keith and I were having lunch in London once, and about three people came over and told us how nice it was that we’d made up!

THE BEATLES: I met them all, but never saw them live. George Harrison would say to me: “Well, you didn’t miss much, because you could never hear us anyway.” I’ll always remember spending a couple of days with him at a festival in Cannes, when we walked the entire length of the beach discussing everything from world peace to Vietnam. So we walked along the beach for a couple of hours, putting the world to rights.

JIMI HENDRIX: I never did meet Hendrix. I would love to have seen him. He was so unique at what he did and how he did it. But, like a lot of other people, I’ve only got the film footage to watch.

Get your tickets to see Rick Wakeman perform a world exclusive of The Myths and Legends of King Arthur and The Knights of The Round Table at Stone Free Festival here.

For more on Rick Wakeman and the original King Arthur production on ice, then click on the link below.

Rick Wakeman; "The on ice thing was an accident, but never a problem"