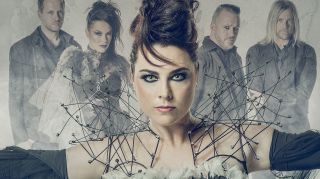 In a world of generic warblers, the operatic swoop of Amy Lee’s vocal was the trump card behind Evanescence’s squillion-selling 2003 debut, Fallen. If this was a primal scream that spoke to the young, angsty and alienated, that’s probably because the Arkansas-born Lee was also a sensitive outsider who felt much of her audience’s pain. Fourteen years later we find Lee older, wiser, in a happier place and comfortable enough with her past to reinterpret the Evanescence catalogue with a full orchestra on their new album, Synthesis.

Synthesis revisits the old songs. Do you remember how it felt to be twenty years old and working on Fallen?

Unfortunately yes [laughs]. How would I describe myself back then? Wide-eyed, full of huge dreams, fairly insecure. But I think that’s pretty common. When we’re young we feel like we’re the only ones that kinda hate ourselves. I remember struggling with feeling like I didn’t deserve to be where I was. So definitely an emotional, hormonal moment. I still have a lot of big feelings, but it seems like the whole world is falling down around you sometimes when you’re a kid.

Didn’t being hugely successful make the problems go away?

No! Having lots of people all over the world touched by our music was a dream come true. But to have thousands, even millions, of people feel like they know you in an intimate way, it was difficult. I’m at a place in my life now where I think I’m pretty good at dealing with it. That whole thing, it’s not so scary any more. But it was scary in the beginning, for sure.

What was it like coming up as a young musician in Little Rock, Arkansas?

When we were making Evanescence I was a normal kid, going to school. But I guess not normal in the sense that I spent almost all of my free time working on making music. I’d be up until three in the morning, with headphones on, on my keyboard. My mom would complain in the morning that all she could hear all night was ‘thump, thump, thump’. But I just loved it. Being a composer, honestly, was my original dream. That’s why it’s so beautiful that I get to work with David Campbell and all these brilliant musicians on Synthesis – people who went to [music] school and didn’t cheat their way

Did being into music make you cool?

No, no, no. I didn’t fit into a clique. For the most part I hung out by myself a lot. I really enjoy being able to be quiet and think.

I’ve actually realised in the last year or so that most of the music I listen to is with a female vocalist. It’s not intentional, I just love the sound of a female voice. My favourite? Björk. Hands down.

Of course. It’s interesting. I almost feel like that wasn’t a choice – I had to be who I was. What rock’n’roll is to me is being yourself, unapologetically, and not changing to fit within the machine. Being a female in the music industry a lot of the time means being overly sexualised. It was just kind of an easy, cheap way to get people to pay attention to you. I was like, that’s not who I am, and I’m not gonna pretend to be anything that I’m not.

Synthesis is released on November 10. Buy from Amazon.

Amy Lee: The 10 Records That Changed My Life