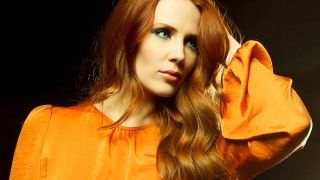 A metal fan since her teens, Simone Simons is the no-nonsense frontwoman with Dutch symphonic metal titans Epica. Ever since she skipped out of a choir recital early to perform at Epica’s first gig, she’s held her own with the band, taking full control of her stage persona and designing her own costumes. A strong sense of humour and a thick skin are vital, she tells us, in rising to the top in what’s still a male-dominated world.

There are a few horror stories about women on the scene experiencing sexism – being mistaken for a girlfriend of a band member, for example. Have you ever been on the receiving end?

Yeah, of course. You get the occasional: “Boobies, nice ass!” But to be honest I’m a bit like the guys when it comes to that, because I enjoy dirty jokes. Through my years of working with guys, you understand how the male brain works and how to communicate. In my years I haven’t really come across a lot of sexism. Once a guy slapped me on the ass, and I turned around and yelled at him – I almost punched him in the face! I can stand up for myself. That’s the only thing I’ve really encountered.

You create your own stage looks – you’ve worked as a make-up artist – but have you ever felt pressure to have a certain image?

I enjoy [working with make-up], that’s all there is to it. But I also like to shock people – they don’t expect me to have a dirty mouth by the look of me. I look like a lady, but I don’t always act like one, and that’s fun for me to toy with. I work with designers to come up with stage clothes, but I’m my own stylist, I buy my own clothes and do my own hair and make-up. There’s only one make-up artist that works with me and one hairstylist. I’ve been doing it on my own for such a long time, so I know what I want. At a show in America I saw loads of blue lipstick and grey lipstick, and it’s cool, it’s a way to express your personality.

You also mention your son Vincent on your blog. How do you fit work and touring around him?

I’ve taken my son on tour to some festivals. He said: “Okay, momma, that’s how you make your money, so that’s how you can buy me a motorbike!” We try to look at our schedules, because my husband [Kamelot keyboard player Oliver Palotai] is also sometimes away, so we make sure one of us is at home on his birthday. At the end of this cycle we’re just going to take it easy, write a new CD in peace then see when we’re gonna start touring again.

Do you think the metal scene on the whole is open-minded and accepting, or at least getting better?

Yeah, especially when it comes to terms like ‘female-fronted metal’. I think that term is totally outdated. Back in the day it would define the sound of the band, and mostly it was a symphonic metal band with a female singer. But mostly, bands that have girls in them, they’re so diverse, it doesn’t say anything about the style of the band. It’s not only female singers, there’s a lot of female guitarists, bass players. I think that term doesn’t imply anything. Of course, we’re still in the minority, but I feel like we’re all equal and that’s how I treat everybody.

Has your confidence and sense of humour helped you brush off sexism?

It’s something I kind of grew into. With guys, there’s no grey area – they want to go and do something, they’ll go and do it. If they don’t wait for you it’s not because they don’t like you. But girls always think too much about everything. That’s what I did in the beginning, and I was so frustrated. I learned not to take things personally, and realise it’s not because I’m a girl. I learned to cut to the chase.

Epica will be touring the UK and Ireland in April with support from Myrkur & Oceans Of Slumber. Tickets are on sale now. Their latest release The Solace System EP is out now via Nuclear Blast.