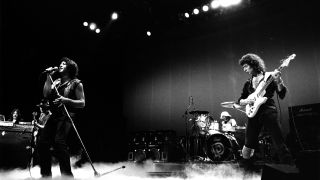 * This was the first new studio album from Deep Purple Mk II since Who Do We Think We Are in 1973.

* Just prior to reuniting, Ritchie Blackmore and Roger Glover had been in Rainbow, Ian Gillan had fronted Black Sabbath, Jon Lord was with Whitesnake and Ian Paice was in Gary Moore’s band.

* The title track was about reincarnation, and is a conversation between one person in their past and present states.

* The album only topped the charts in one country – Switzerland.

* In the UK, it got to number five, while in the US it reached number 17, selling over a million copies.

Read about the classic In Rock album

And read about when the next Purple album will be ready