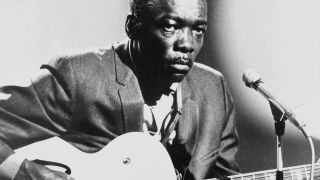 Five seconds of decision! Detroit was aflame... but was it John Lee Hooker or the MC5 who held the Zippo?

On July 23, 1967, smack in the middle of what white West Coast hippies persisted in claiming was the ‘Summer of Love’, Detroit boiled over. Racism was deeply, endemically institutionalised: in housing, the job market, and – crucially as far as Detroit’s black community was concerned – in the day-to-day policing of their neighbourhoods.

Detroit was a tough, militant take-no-shit city, and the build-up of black anger and resentment should have surprised no-one. Even though, the previous year, Berry Gordy was still worrying about the insistence of his former child star, no-longer-so-Little Stevie Wonder, on recording a pop-soul version of Bob Dylan’s anti-war, anti-racist anthem Blowin’ In The Wind in case it should prove too ‘controversial’ for the delicate sensibilities of Motown fans. It wouldn’t have taken much to send the city up in flames and, as things turned out, it didn’t.

An illegal drinking club had permitted a party which started on the night of Saturday, July 22 to rave on well into the following morning. The police smashed the doors down with sledgehammers and hauled 80-odd customers off to the hoosegow. Someone then chucked a bottle through the back window of a police car, and the Detroit riot was off and running. Things didn’t calm down until the following Thursday, by which time snipers and police had shot it out in running battles, the National Guard had been called in, thousands had been rendered homeless after being burned out of their dwellings, and more than 40 people – including a National Guardsman wasted by so-called ‘friendly fire’ and a shopkeeper battered to death by rioters for attempting to protect his store – were dead.

John Lee Hooker was not, by nature, a street-fighting man, and therefore did not participate. He understood its causes full well, however, and enjoyed – if that is indeed the appropriate term – a ringside view of the proceedings from his home on Jameson Street.

“I know what they were fightin’ for,” he said. “I feel bitter about that. A big city like Detroit… you know, racial like that. It wasn’t like Mississippi, but… they hide it under the cover there. In Mississippi they didn’t hide it, they just come out with it, and that’s the only difference. It finally got so hot, people got so fed up, that the riot broke out, with all the burnin’ and the shootin’, the killin’. I could just look at the fire from my porch or my window, outside in my yard… I could see places goin’ up in flame, hear guns shootin’, robbin’ stores, runnin’ the business people out of they stores. There was a lotta lootin’ goin’ on, y’know… the po-lice was even lootin’. They like to have burned the whole city down. A kid brought me a new git-tar, a Gibson 12-string. Cost about $1,500… I got it for five dollars. The kid didn’t know what he had!” Hooker laughs in memory. “‘You wanna buy this?’ ‘Oh yeah!’ ‘You got five dollars?’ I say, ‘Yeah!’

“You could see the fire burnin’. You could see the bombs, the smoke, buildin’s goin’ up. You see the people runnin’ out the stores, the business people leavin’ everythin’ in there. Stuff was layin’ in the streets, man. Clothes, brand-new shoes, just layin’ there. Couldn’t tell no-one not to pick it up, and some people did pick it up. Went to jail for stealin’ stuff. Two policemen… found a whole lotta stuff that they done took. They suspended them, and put them in jail. Everybody was lootin’. The white, the black…”

“And after that I wrote that song called Motor City Is Burnin’.”

That, however, is not what the song’s composer credit claims. Both Hooker’s original 1967 recording of Motor City Is Burning – cut barely two months after the events it describes – and its 1968 cover by rabble-rousing Detroit anarchopunk pioneers MC5 are officially attributed to former Vee Jay executive Al Smith; and thereby hangs a tale, or even several.

Following a lengthy spell with Vee Jay and brief dalliances with Riverside, Impulse and Chess, Hooker had recently signed to a big label; or, to be more precise, a big label’s blues subsidiary. ABC Records already had Ray Charles, Fats Domino and B.B. King on their books, and now they launched the BluesWay imprint, moving B.B. over and signing John Lee, whose first BluesWay album, Urban Blues, was pretty much a continuation of Vee Jay by other means, albeit with a higher budget and slightly more care.

Produced by former Vee Jay exec Al Smith and recorded in Chicago over two days (albeit two days a month apart) in the autumn of 1967, it reunited Hooker with Jimmy Reed’s right-hand man Eddie Taylor, who played bass on the first session, which yielded Motor City Is Burning, a brand-new song inspired by the apocalyptic events of the previous summer. On (anonymous) lead guitar was an acquaintance newly flitted from Chess Records and now ‘exclusively’ signed elsewhere: Buddy Guy.

“I left my day job in August of 1967 [to cut] my first album with Vanguard,” Buddy recalled.

“I was playing locally at night in the clubs in Chicago, and goin’ to my job every mornin’. The only thing I ever did with John was Motor City. I axed him about that, you know, I never really heard it. I don’t know how did I sound or what. I normally done heard everything I ever helped anybody or was involved with, hear a playback, but I never got that, I never heard that played back.” However, he remembered, “I had fun…”

Fun? John Lee’s original version, set to a purposeful mid-tempo shuffle with Hooker’s trademark rolling bass-string runs intertwined with Buddy’s (equally trademark) quicksilver licks as commentary, is a textbook model of how to do a topical blues absolutely perfectly, drawing directly from recent personal experience. Unlike many other Hooker choons, this one operates according to strict blues rules: I-IV-V 12-bar changes and tightly rhymed AAB lyrical structure. The lyric is terse and telegrammatic; Hooker’s delivery of it conversational and intimate. He’s telling you what was happening almost in his back yard: it was, he said, ‘worser than Vietnam’.

Meanwhile, in another part of the city, and speaking of the Vietnam war… Black folks weren’t the only ones in Detroit who were pissed off. The main focus of discontent among the Motor City’s wilder white youth were a rock band calling themselves the MC (Motor City, natch) 5. Singer Rob Tyner, guitarists Wayne Kramer and Fred ‘Sonic’ Smith, bassist Michael Davis and drummer Dennis Thompson (not to mention their manager/mentor John Sinclair and his Trans-Love Energies organisation) had concocted a uniquely incendiary strange brew drawing more or less equally on the guitar firepower of Hendrix and The Who, the vintage rock’n’roll energies of Chuck Berry and Little Richard, the soul showmanship of James Brown and Wilson Pickett and the new-jazz explorations of Sun Ra and John Coltrane; all combined, via Sinclair’s White Panther Party.

With a defiantly radical political agenda of solidarity with the Black Panther Party plus ‘dope and fucking in the streets’. What’s more: it was working. Even as an unsigned local band, the MC5 coud draw 3,000 kids to a weekend ballroom gig. And the local authorities did not like them one little bit.

The riots had affected (and inspired) them, too. Wayne Kramer recalled “huge flames five storeys into the air”, while Sinclair proclaimed “it was war between the citizens of Detroit and the United States of America”. Though more prosaically, Kramer’s analysis was that “this was no organised resistance… it was just people who had had enough.” Sinclair had put up a sign outside one of the Trans-Love Energies buildings reading ‘Burn Baby Burn’ and bearing the Black Panther Party’s logo, “…and that,” he said, “was the red flag in the face of the bull.”

Not surprisingly, the MC5 had been subjected to police harassment and random firebombings of their offices and vehicles, and this was almost the last straw. Soon afterwards, the MC5 got the fuck out of Detroit, relocating to the more peaceful college town of Ann Arbor.

Needless to say, as soon as the 5 heard Hooker’s song, they were all over it like a cheap suit. It was rapidly incorporated into their live set and featured on Kick Out The Jams, their massively influential in-concert debut album. Yet, despite the fact that their version was well over twice as long as John Lee’s (thanks to a succession of incandescently epic Wayne Kramer guitar solos) and was, in performance at Detroit’s Grande Ballroom, probably at least five times as loud. It was undoubtedly the same song describing the same events, with a very similar arrangement but viewed from a very different angle.

Tyner not only bellows and blusters where Hooker tersely snaps out his reportage, but he gives the lyric a few key tweaks. Where Hooker sings ‘There ain’t a thing I could do’, Tyner replaces the line with,_ ‘There ain’t a thing they can do’_. Hooker is concerned about the safety of his city and his community (not to mention his own home and family), whereas the 5 just wanted to see shit burn down. Tyner also amends Hooker’s ‘snipers’ reference to ‘Black Panther snipers’: more rhetorical revolutionary romanticism than an assertion based on any evidence. Maybe it did, after all, depend on who you were, where you were… and what you wanted.

So who wins? Well, if you like your blues pumped-up, cranked-up, steamed-up and Marshall-stacked-up, then the MC5 take the biscuit. Their version is a masterpiece of high-intensity, high-pressure blues-rock which – literally and metaphorically, if not politically – was coming from the same place Mr Hooker was, the 5 having been exposed to the same cataclysmic events as he was.

However, if you want a first-hand report of a major event from one of the 20th century’s greatest bluesmen, served up in a few crisp, laconic verses and decorated by a fine visiting guitarist, the Boogie Man nails it. Takin’ it easy… but takin’ it.