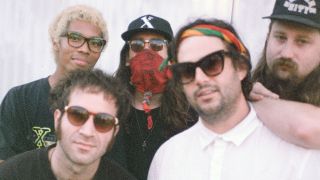 At their worst, compilation albums are little more than filler. Even more than a live album thrown together to hit contractual obligations, a lazy compilation is the champion calling card of a band clean out of good ideas but with units to shift.

But when they're done right – for example, in the case of Buzzcocks' best album Singles Going Steady (don't @ us), or Sub Pop 200, or any of the singles bands' best ofs – they become a searing showreel of what makes a band, label or moment in time special. It's a reframing through a band's own lens, and a chance for them to fine-tune their own story.

For Culture Abuse, their newly-announced compilation album, Good Shit, Bad Shit, Who Gives A Shit?!, makes sense. Their career so far has been a whistle-stop tour of scrabbled-together albums, art projects and triumphant live moments. They've revelled in DIY cut and paste culture, even when signing to not-quite-major label Epitaph. They've never lingered, instead preferring to explore whatever sound represents who they are in that moment. Even in the course of a relatively short career, it can feel like a lot to get your head around.

They're also a band who feel most at ease with themselves live, rather than on record. The halt in live music has forced them to take pause, reassess and get to grips with their own back catalogue.

“With the state of the live music industry in limbo, we thought now is a better time than any to open ourselves up and give the listener a different take on some of our past work," the band say.

"We take the groovy mid-tempo songs off Bay Dream (2018) and give you our aggressive live set atmosphere. We re-imagined the faster, more upbeat songs from Peach (2016) and slowed them down into an acoustic, stripped-down set.

"Cover songs from iconic bands like the Sex Pistols, the Buzzcocks and the Equals – we tear ‘em up and piece ‘em back together the way we do when we sit down together and make ‘zines, tour posters and show flyers. Some of our original songs are covered by our close friends within this collection.

"We’re presenting this release through digital outlets so the songs are at their most accessible. So whatever’s happening in your life, here are some songs to help you take it all on: the good shit and the bad shit."

Check out the reworked version of 2016 single Heavy Love below. Good Shit, Bad Shit, Who Gives A Shit?! will be released via Epitaph on July 24.