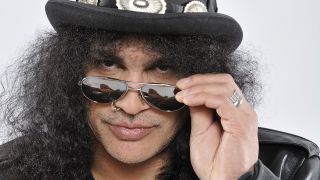 You wouldn’t hold it against Slash if he decided to just bin it all off and retire to a beach in Hawaii after the last couple of years. Touring stadiums around the world with the all-conquering, mega-bucks Guns N’ Roses reunion could have brought an amazing career full-circle nicely – and, you’d imagine, plant him a nice retirement fund in the process. Forever looking forwards, though, Slash instead released Living The Dream, a brand new solo album with his other band, The Conspirators, and promptly hit the road again. We managed to collar this living rock’n’roll icon and put the ultimate questions to him – the ones sent in by you

“Ha ha! I find it on Tumblr, Pinterest or some weird site I might come across. Horror and nudity are my two favourite things. I do post some music stuff but that’s so predictable, so I post all this shit that I like that has nothing to do with anything that people necessarily know me for. I’ve been producing horror movies as of late, so it falls into that.”

If you could create dinosaurs from amber like in Jurassic Park, would you do it?
Des Harris (via email)

“I’d be the first guy to do it! Even though I know it would not be right and not be in the best interest of the animal – I’m very much an animal activist and conservationist – I know that if I knew how to do it, I’d be compelled to do it. I wouldn’t start with a T-Rex, I’d start small with something that could acclimate to this environment easiest, like a compy [Compsognathus, AKA the Small Green One from Jurassic World].”

What is the most disgusting thing you’ve ever had caught in your hair?
Gary Clark (via Facebook)

“Guns N’ Roses opened for Social Distortion back in 1985 at The Street Scene, which was this big street festival all through downtown Los Angeles, and we had a spitting contest with the people in the audience and all that spit is all in your hair. That’s a good one! It was a punk thing. We were the kind of rock’n’roll band that had a punk influence but to a punk audience we were still a rock’n’roll band, so if they decide to spit on us we’re going to spit on them, and it lasted for the whole show.”

How does it feel to know that the November Rain video has been viewed a billion times?
Tim Roughsedge (via Facebook)

“It’s surreal. It’s something I don’t know how to imagine – that many people looking at one piece of film. I’ve got to give Axl a lot of credit because that epic video was something that he had this vision of doing. We were all like, ‘Yeah, whatever,’ at the time because it wasn’t just a simple ‘shoot the song in a day’-type thing – it was over a period of days and was like a mini-movie. He was really fuckin’ into it and they did a really good job with it, and for those big videos I would write my own part, and that turned out to be a major part of this whole thing. As much as I wasn’t totally into the whole thing, the fact that it’s become an iconic piece of video viewed by a billion people is pretty cool.”

Have you ever seen a ghost?
Tess Curtis (via email)

“I did when I was high, ha ha! I saw a lot of ’em. With a clear mind I don’t recall having seen anything paranormal that I could communicate with. I think a lot of it was influenced by chemical ingestion. My mom was very spiritual and I’ve adopted a lot of that open-mindedness. I’m very open-minded and a lot of that stuff makes perfect sense to me.”

Which Guns N’ Roses solo are you most proud of?
Jacob Murphy (via Facebook)

“The most fun I have doing solos live is the improvised stuff, because that’s when you’re flying by the seat of your pants, spontaneously going for something, and when it works that’s the most gratifying. As far as solos you stay true to, November Rain is a good one. It’s a really powerful piece in that song. I love playing the Sweet Child O’ Mine solo still to this day. Playing the actual song, when you first go into it, it comes in a certain place in the set where people react in such a huge way, it’s like having sex. That interaction where it’s a give and take thing, you can’t not enjoy that, right?”

Who would you bring back to life?
Vittorio Tailoi (via Facebook)

“I wouldn’t. If I was to use my imagination I’d bring Edgar Allen Poe back to life or Jimi Hendrix, but then what would you do? You’d be responsible for somebody being pulled out of the grave way after they’d died, and saying, ‘OK, have a good time!’ And Poe would be like ‘Oh now I’m here, you’re really a fucking bore, what am I supposed to do?’”

With the rise of bands like The Struts and Greta Van Fleet, do you think the classic rock sound is making a comeback?
Jennifer Shack (via email)

“That’s a good indication. The popularity of those two bands and all these other young bands that I’m aware of, there’s a rumble of this young rock movement that’s more about traditional rock’n’roll than what we’ve been used to, which has been void of real attitude. I think that there’s something happening right now that’s going to be interesting to see in five to 10 years’ time.”

Why did you choose a Les Paul?
Michael Walker (via Facebook)

“I’m not sure if I chose the Les Paul or the Les Paul chose me. When I started picking up the guitar, the Les Paul had a certain aesthetic appeal to me. I didn’t know a lot about which guitar sounded like what, but a lot of guitar players I liked at that point in time had Les Pauls and I just thought they looked cool. I did try a whole bunch of different guitars, from Strats to SGs, and then came full circle back to Les Paul, and that wasn’t until 1985 with Guns N’ Roses. I think I was using a Bicester Rich when Guns N’ Roses first started.”

What is the most important lesson you’ve learned in your career?
Briony Fann (via email)

“Patience. It ties in to everything and it’s a virtue that for somebody like me is hard to come by. Especially working in films, but working in the music business when it comes to creating, writing or the timing between notes, patience is something I’ve started to pick up on and realise its importance. I’m not a chronic OCD but I’m pretty compulsive. I just do shit and see what happens after the fact.”

If there was a fight between Freddy Krueger, Michael Myers and Jason Voorhees, who would win?
Helen Moore (Email)

“This is just silly. They did a movie of Jason and Freddy but I think Michael Myers would take them all out because he never seems to stop. I was never a big slasher guy, I’m more into monsters or more supernatural kind of stuff instead of psychos running around chopping people up. I’ve never been a big gore guy.”