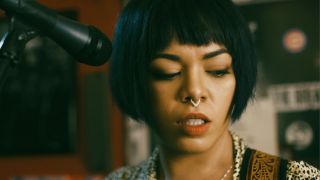 Tour is a shapeshifter. Time bloats and contracts, reality is heightened, and daily routines are traded in for something more shapeless and free.

In my life, I’ve never particularly been given space to be spontaneous or devil-may-care. There was no backpacking Europe after college, no summer abroad. My father was correct when he told me after college that I would have to “work twice as hard to get half as far”. I’ve been called intense, intimidating, focused.

However, on tour with my band Ganser, I am impulsive. I have backup. I sleep on floors. We play theatres. We play small clubs. It’s life let loose – but there will always be reminders that I am a Black biracial woman, especially in the United States.

DIY music scenes are romanticised as an endurance test. If a band holds on long enough and learns enough to protect the thing they’re making, they’ll hopefully move onwards and upwards towards more opportunities with more essential support.

But in the music industry, marginalised artists can find themselves pulp spat out in favour of acts that are an easier sell. This can lead to those artists not being chosen by labels or booking agents, or eventually dropping out of music all together, perpetuating a lack of diversity from all sides.

Ganser began as a reprieve for two women grinding in design and film. “I got some software, you want to make some music?” my bandmate Nadia asked during one bitterly cold Chicago winter, unwittingly placing us both in yet another uphill battle. To date, unlike many of our peers, we have never been invited on tour as support for a white, non-LGBTQ+ band. Often at festivals, I am the only Black woman, or one of two or three at most.

For our band, every gig begins with a plan. Nadia and I intentionally walk through our set-up with a finely-tuned a script designed to convey to the sound person (usually a white male) that we know what we’re doing. Unless asked, our white male bandmates know it’s important we establish our competence. If we don’t, it’s fairly common for our requests to be ignored during a performance. It ends with “...and a little reverb on the vocals to make it palatable [insert laugh here to seem non-threatening], not full Cocteau Twins.” Every night I need to make sure they understand I am not a backup singer when it comes to my vocal levels. When I am approached after the show about my fretless bass, they comment on my ability to play my instrument like I’m a dog playing poker. Is it because I am a woman, or because I’m Black?

The answer, of course, is both. One learns as a person whose gender and racial identities collide that every interaction is a mishmash of intersectional factors. As I lead load-in in some unfamiliar town, is the club owner staring at me carrying in equipment because I am a woman, or because I am Black? It really doesn’t matter. It’s the most tedious game of Schrödinger’s cat.

In the Fall of 2016, I am seated in the passenger seat of our tour van as we drive away from a show in Ohio. Our guitarist Charlie is at the wheel. He is a sweet but intense-looking blond, with big eyes and a bushy moustache. He looks 24 at most.

The state of Ohio is notorious among bands – and drivers in general – for being a speed trap. Driving through back roads, watching cornfields, we’re pulled over by a cop in an unmarked SUV. Reflexively going into ‘pulled over while Black’ mode, I look out the window, make myself as small and innocuous as possible and watch the rare dot of a car on the flat Midwest horizon.

Experience has taught us it’s important in these situations, especially when you are in a remote area as a Black person, to end encounters with the police as quickly as possible. Your hands remain in view (this also applies to all store and gas station visits). There is no room for incredulity, no air for talking back. Nothing except the picture-perfect performance of law-abiding citizen.

So the familiarity the cop extends towards my bandmate catches me off guard. He addresses my bandmate as if talking to his younger self, with a light chiding – and perhaps a touch of secret envy for his road-tripping adventure.

The way the encounter ends almost makes my heart stop beating entirely. After being handed his license and registration, Charlie asks, without much thought, “So, officer, how fast can I go?”

The emphasis on can, mixed with Charlie’s blithe smile and the fact the cop had just told us the road’s infrequently posted speed limit make it clear what Charlie is really asking. My teeth clench in my mouth as the officer chides him: “Son, are you asking me how much you can speed?”

The “son” feels friendly. It’s not the tone of “son” I’m expecting to hear. Nadia and Brian smooth things over from the backseat. Shocked, I listen to the ease of this encounter – the embarrassed laughing, the “Oh, of course not!” – as it ends in a warning. We were going roughly 10mph over the limit.

It’s only in driving away, after seeing how nervous I am, that my bandmates and I have the talk about how interactions with the police are not the same for me, and how that needs to be factored into how we operate when we are pulled over or cross borders.

Driving hours through small towns feels precarious. There is no Green Book for Black musicians, and the drives between shows are filled with opportunities for incidents. I remember once waking up in the back seat of the van in Alabama, groggily taking in a gas station lined with different iterations of the confederate flag. “Do we really need to stop at this gas station?” I asked. Apparently, pickings were slim. As a band with two Jewish members, multiple queer people, and myself, we approached the building cautiously, staggering our visits. Nadia and Charlie went first. Upon returning, they were very eager to leave, citing anti-gay pamphlets in the bathroom.

There comes a point on tour, however, where the urge to “just get it done” overrides what would normally seem like a bad idea.

Waiting for the restrooms, the decor was grotesque to the point of absurdity. A large portrait of 45th Governor of Alabama and noted segregationist George Wallace hung on the wall. Taxonomies of the confederate flag were arranged on posters like pinned butterflies. And, most incongruously, a small pastel painted wood sign, the type you might find at a craft store, with tacky swirled handwriting typeface. It read – and I regret not taking a photo until this day because I was scared – “Rules for Living”. The first commandment? “Love your neighbors.”

As I’ve toured and grown, things that shocked me no longer do, and the sharpness of each interaction has dulled – though they still hurt all the same. Having white bandmates is a privilege that has both shielded me and exposed ways in which I would be treated differently in their absence. It is only now that I sit here in isolation, with no shows on the books, that the totality of experience rushes back.

For many people, entering into a space where you are a clear micro-minority breeds a certain kind of perfectionism. Hyper-competence is a coping strategy – not to mention a recipe for high blood pressure when it necessarily includes detailed spreadsheets, having to advocate for correct placement on bills, and generally coming across to white folks as “difficult” with varying degrees of success.

To be “easygoing” requires belonging, in some ways. Ganser’s music is hardly that. It worries, it turns itself into knots, and our live shows consist of brutalised guitar and prickly words, both simultaneously wanting to connect and escape.

When it does turn pretty, I can only hope that it does so out of contrast. The good exists for us as a band despite and in spite of the difficulties as we shamble uphill.

Ganser's new album, Just Look At That Sky, is available on July 31 via Felte Records. Check out the video for new single Emergency Equipment & Exits below: