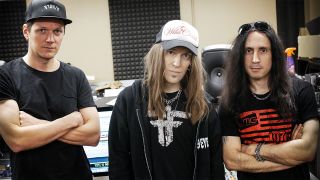 Expect:  A consistent, classic Children Of Bodom album with a couple of unexpected twists

Amazingly, Children Of Bodom have now been churning out their menacing melodic blend of extreme metal for over a quarter of a century, and after a three-year break, the Finns are back with their 10th full-length studio album. We got frontman Alexi Laiho to give us the full lowdown on what to expect from their next chapter – and it sounds like fans are in for a few surprises…

How’s the recording been so far, Alexi?

“We’re actually doing really well – it’s been super-fast so far, so now I am just hoping that everything is going to go smoothly from here onwards.”

That’s good – so you’ve not faced any hiccups or challenges at all since you’ve been in the studio?

“Not yet, not really – but we do what we always do; we’re always very well prepared when we go in, so I guess this time around we practised a shit-ton of times, a lot more than we did with the last record, and that’s one of the reasons it’s been going so smoothly. I don’t want to jinx it or anything because you never know what’s going to happen… not that I believe in jinxes.”

“It’s really shaping up to be better than I thought it would be, and I swear to fuck I’m not just saying that!”

Why is it better than you thought it would be?

“One thing I can say – and this is a fucking fact, it’s not even up for debate – is it’s actually a lot more straightforward as far as song structures go. [2015 album] I Worship Chaos was also pretty straightforward but it’s got more of a rock’n’roll vibe to it. It’s still metal and dark and shit like that, but I’d say it’s more rock’n’roll.”

So, recording-wise, did you change things up a lot?

“Not really, but funnily enough we had more time to work on the songs and the arrangements and it’s kind of crazy to think that the more time you have, you’re more likely to start fucking around with the song structure, but no, we started cutting bits, stripping it down a little bit and getting rid of all the extra shit!”

Have you started working on the lyrics?

“I’m still working on those at the moment. I have a shit-ton of ideas and I do have some songs that are finished, but there’s nothing really that crazy, I mean nothing out of the ordinary. I already have two songs that are related to the Bodom incident [the 1960 lakeside murders], which will be another horror movie, King Diamond-type theme, but so far it’s just me fencing out shitty feelings and being angry.”

Is there anything on this album that will surprise or shock fans? Can we expect the unexpected?

“Maybe, with the way some of the songs start and even the actual record, that itself is going to be a surprise for anyone who has heard a Children Of Bodom album before! It’s also going to be a little different because we’re going to have an actual intro song this time around; a song that I’ve written that we actually play, so it’s not a clip from a movie, it’s not a keyboard section, it’s an actual song that’s about a minute long and that’s something that we’ve never done before.”

Have you purposefully tried to experiment a little with this record?

“I don’t try and do shit; I just do what comes on naturally because if you try to do too many things or venture out too much then you end up writing stuff that’s not real, so I always try not to think about it too much and then unusual things just sort of happen, like that intro song I mentioned before, or a couple of other songs that aren’t your typical Children Of Bodom songs.”

Well, typically, Bodom songs are super-heavy, fast-paced and full of riffs. Will there be any slower tracks?

“Yes! There are actually two on this record – the other one is slow/mid-tempo but yes, they’re not all fast and heavy!”

The new Children Of Bodom album will be out later this year via Nuclear Blast.