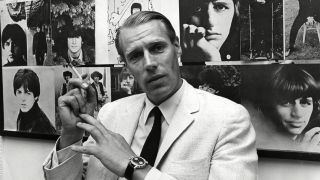 What if George Martin and The Beatles had never met? Martin, already established as a producer, would surely have gone on producing records for The Goons, girl singers and symphony orchestras, among others. The Beatles’ native talents would probably have lifted them to the charts at some point, but would there have been a Revolver or a Sgt. Pepper, with all that startling sonic growth from their first recordings? The fateful crossing of paths brought out the best in both Martin and the Fab Four, made their legacies and changed the face of pop music in the 60s. As John Lennon once said of Martin: “He helped us to develop a language.”

Born in 1926, George Martin grew up in north London. After serving in the Royal Navy, he attended the Guildhall School Of Music, studying piano and oboe, and worked in the BBC’s classical music department. In 1955 he began working as a staff producer at EMI Parlophone, and in his first few years he recorded a diverse list of artists, including Matt Monro, the Ron Goodwin Orchestra and Peter Sellers. “That’s part of my background, the catholic world of music that has no limits, no blinkers,” Martin later said. “I know many musicians in the classical field who believe everything else is rubbish. There are a lot of opera snobs, jazz snobs too. But music really isn’t like that. It’s so diverse and so good, and people should be able to participate in all forms.”

That attitude, along with an extensive musical vocabulary, incredible ears and a sense of playful experimentalism, made Martin the perfect foil for The Beatles, as well as for Cilla Black, Stackridge, America, Jeff Beck, Gerry & The Pacemakers, Cheap Trick, Ultravox and many others he worked with.

Martin’s matinee-idol looks and gentlemanly manner often belied his wild creative streak. “I suppose because I purposefully never grew my hair when The Beatles were around,” he said, “I used to be seen in a suit and tie at EMI, and it was well known I never took drugs, so they must have thought: ‘How can this guy make freaky records like he does?’ I don’t give a sod what people think, I just do what I want.”

George Martin passed away on March 8 this year. He was 90.

After the White Album’s splintered solo pursuits and the tense, Spector-produced Let It Be, Paul McCartney approached Martin to make an album “the way we used to”. It didn’t quite go that way. With the four members rarely together in the studio for overdubs and tensions flaring between John and Paul over side two’s song suite, the group continued to come apart. But Martin applied his polish, creating a beautiful illusion of unity.

Even now, Abbey Road can take your breath away. That mountain-moving riff on I Want You (She’s So Heavy), those harmonies on Because, Ringo’s solo on The End. It’s also the best-sounding Beatles album. And that’s saying a lot.

In the mid-70s, Jeff Beck, weary of power trios and prima-donna singers, ventured into uncharted jazz-fusion territory as a soloist, with Martin’s help.

The resulting record, the first instrumental album ever to reach the UK Top 10, was full of lyrical ballads and funky workouts. “George put the album into perspective,” Beck said. “He controlled it, and any wild ideas that we had, he pushed them out the window. I wouldn’t say he completely comprehended what
I was doing, but then I didn’t either.”

Martin, a singer’s producer, essentially reframed Beck’s guitar as a voice, helping him define the distinct career path he’s been on since.

What would The Beatles have sounded like in 1980? Look no further than Stop This Game and World’s Greatest Lover, the two standout tracks on Cheap Trick’s fifth album, All Shook Up.

The band always had Beatles leanings, but teaming with Martin – and engineer Geoff Emerick – gave them further licence to indulge. “We’d tell them what sound we want,” guitarist Rick Nielsen said, “and one minute later we’d have it. It’s not messing around with dials – George knows how to get it.” Dramatic, Bond-style orchestrations, screaming Helter Skelter heavy-osity – Martin helped Cheap Trick carry that weight with flair and finesse.

On the brink of 40, McCartney took stock. He’d lost his old friend John Lennon to tragedy, Wings had run aground creatively and he stood apart from the post-punk movement. His response was to reunite with Martin for his most mature album ever.

In the title track, Wanderlust, The Pound Is Sinking and the moving Lennon tribute Here Today, Macca fused together all of his strengths. “We decided to make a very professional album,” he said. “It was the first time that George Martin produced me since Live And Let Die. And when you work with people who are really good like that, it makes it easier for yourself.”

With so much mellow gold flowing out of California in the 1970s, it’s understandable that the affable trio America are not as well-remembered as the Eagles or Jackson Browne. But this, their fifth album, is something of a soft-rock masterpiece. Hits Sister Golden Hair and Daisy Jane were standouts, Bell Tree, Company and Seasons are deep-cut riches, and Martin’s orchestrations are gorgeous throughout.

“[George] was a mentor who guided the recording with a sensitive creative touch,” America’s Gerry Beckley said, “always aware of the fragility of the ideas we were trying to express in a song.”

Stackridge The Man In The Bowler Hat MCA, 1974

Jaunty songs with tempo shifts and movements, such as Fundamentally Yours and The Last Plimsoll, must have struck a familiar chord with Martin. Coming across like the quirky love child of Lovely Rita and Mr Kite, Strackridge’s songs inspired some of the producer’s loveliest post-Beatles arranging work.

“Working with Sir George was indeed among the most enjoyable weeks of our long story,” Stackridge mainman Andy Davis said. “Not only a musical genius, who helped us discover ourselves, but a true English gentleman as well.”

By 1979, UFO was an uncertain flying object. Guitarist Michael Schenker had quit. The band’s label were pressing for a hit, à la Foreigner or Styx. And for No Place To Run, their eighth album, they teamed with George Martin.

An odd coupling, but once producer and band adjusted (Martin was horrified that Phil Mogg waited until the end of the sessions to write lyrics; UFO were amused by Martin’s “colonial and civilised” schedule), they found common ground, combining ballsy rock with pop polish on the epic title track, Money Money and Young Blood. Martin and UFO were later dismissive of the album, but it remains a solid entry in their shared discography.

Martin had a ground rule during the making of this album: no Beatles questio ns until dinner time. “When the chef would ring the dinner bell at five o’clock, we would all head into the dining room like little kids waiting to ask our ten million questions,” recalled bassist Wayne Nelson.

Naturally, some of that Fabness found its way into the tracks, from the lush a cappella harmonies of Full Circle to the Sgt Pepper-y Orbit Zero to the gritty Get Back-ness of Just Say That You Love Me. The band even coaxed Martin into playing some keyboards on the record.

“There was history all around us,” Nelson recalled. “It was a truly incredible experience.”

“He had a huge interest in the synths and drum machines we were using, and treated them in the same way he would treat any orchestral instrument,” Ultravox frontman Midge Ure said of George Martin. “He saw no divide in their ability to create sound, only in the way the sound was generated.”

Listening to the crystalline sonic architecture of Quartet tracks Hymn and Reap The Wild Wind (which, as singles, reached No.11 and No.12 respectively) and the way Martin humanises the circuitry, it’s a shame he didn’t work with more synth-pop groups. Quartet is the most overlooked album in his distinguished catalogue.

Various Artists In My Life Echo, 1998

Not so much an album to avoid, as one put towards the bottom of the list of essential George Martin-produced albums.

Martin certainly assembled a strange and varied cast on this collection of covers of Beatles classics. On one hand you have the good: Jeff Beck rendering A Day In The Life with his soulful touch, and classical violinist Vanessa Mae bringing out the hidden Beethoven in Because. On the other, far less appealing hand there’s Sean Connery’s dramatic reading of In My Life, Goldie Hawn’s cocktail-jazz take on A Hard Day’s Night and Jim Carrey’s weird faux Brit-punk twist on I Am The Walrus. Unnecessary, really.

She Loves You The Beatles