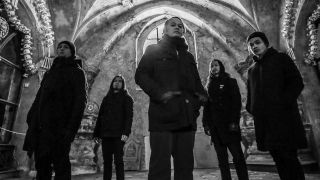 Indonesian metal superheavyweights Burgerkill are releasing their new album Adamantine on April 20, but are streaming it in full exclusively with Metal Hammer!

We've been championing the groove-laden death metallers for years – they even won a Metal Hammer Golden God award in 2013 – and they're now one of the biggest metal bands in South East Asia.

We caught up with frontman Ebenz for a quick chat about the record and collaborating with Metal Hammer writer Dom Lawson!

Adamantine is obviously an important record for Burgerkill and the Indonesian scene. So what can people expect from the new stuff?

“For the sound, we aimed to keep the Burgerkill sound, which is powerful, angry, and heavy. That’s all what we wanted to deliver with this album. We wanted to show that this is the Indonesian sound. So people from around the world who listen to this album can spot the characteristics of Indonesian metal, just like when we first listened to Morbid Visions, and it was like, ‘This is not America, this is Sepultura!’”

You collaborated with Metal Hammer’s Dom Lawson on United Front. Have you gone mad?

“The idea came about first in 2013, backstage at the Golden God Awards. We had the idea that Dom could write us some lyrics. He was interested in collaborating, but it took almost four years before we sent him the song in 2017! Then he sent us the lyrics. He came to Bandung to be one of the judges for Wacken Metal Battle Indonesia in 2017, so while he was in Indonesia, he did the vocals in the studio. It’s a special thing to have him on the album. It’s high appreciation from a friend. Dom has performed twice with Burgerkill, so it would feel incomplete if he wasn’t on the album. United Front is like a statement that we don’t care what happens as long as we have the same focus, the same vision and the same mission. Making friendships is far more important than winning wars.”

What are your plans for after the album’s release?

“We have lots to do this year. With this new album, we have new and sharp ammunition to do many things with. A world tour is one part of it. We want to spread the music of Burgerkill as widely as possible, to the whole world. We want this music to have a greater impact than before. We want the music of Burgerkill to stay in people’s hearts. It demands hard work and high concentration to achieve all that, but we’ve done everything step by step, just trying to keep finding new opportunities. May luck forever be with us!”