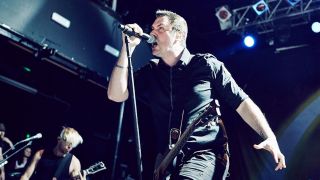 Benjamin Burnley leans out from the stage, thumps his burly chest and surveys a forest of devil-horned hands raised aloft by London’s grunge-metal faithful. As So Cold grinds to its shuddering climax, the singer bellows a proud boast. “That was the first song Breaking Benjamin have ever performed outside of America!” The cheers are deafening.

May 27, Koko, Camden. Breaking Benjamin are making their belated British debut to a rapturous reception. From choppy, melodic pile-drivers like Follow to spangled, soaring power ballads like Ashes of Eden, the assembled fans roar along to almost every word, drowning out the band’s stacked vocal harmonies in places. Three songs into the set, Burnley declares he has just decided to record the band’s next album in London. More thunderous cheers.

The Pennsylvania-based emo-rockers arrive on our shores on the back of their most successful album to date, Dark Before Dawn, which topped the Billboard charts last summer and rocketed the band into the arena-rocking superleague in the US. This comeback is all the sweeter because Breaking Benjamin looked like a spent force at the start of this decade, taking a five-year hiatus due to medical and legal problems. Their 2009 album Dear Agony featured a scan of Burnley’s brain on the cover, a reference to recurring symptoms which continue to baffle doctors even to this day.

“Constant joint pain, constant muscle pain, constant dizziness, constant fatigue,” the 38-year-old singer explains to Classic Rock a few hours before the Koko show. “All that stuff is still there, I never got any answers from the medical community. I’m just pushing through it, man, just taking one day at a time. Having my friends in the band helps, having an incredible family helps, having this amazing support system from our fans definitely drives us to push forward. All of that makes it possible for me to deal with these horrible things every day. Even if it kills me, I’ll still play these shows. I’d rather die up there onstage than at a desk or in a bed or something like that.”

During their long sabbatical, the old line-up of Breaking Benjamin disintegrated due to a bitter legal dispute over the inclusion of unauthorised tracks on a 2011 compilation album. By 2013, Burnley had dismissed every other band member and was fighting to retain solo rights to the name. He went on to record Dark Before Dawn almost single-handedly, then recruited a whole new band, including guitarist Keith Wallen and bass player Aaron Bruch, both of whom now share vocal and songwriting duties in the rebooted Breaking Benjamin. The effect on the band’s live sound, Burnley says, has been strikingly positive.

“It’s made everything better, none of the older guys could sing at all,” he nods. “I made a point to hire guys that were actually singers in their own bands, so they could do all the harmonies properly. This allows us to really free up our music. We don’t use click tracks, we do everything live in real time. It just sounds so much better, more true to the album.”

Despite a swelling profile and growing fan demand, Breaking Benjamin resisted all previous offers to tour outside North America, largely because their singer suffers from an extreme fear of flying. As the band cross-cross Europe for the next three weeks warming up for their Download festival debut in June, Burnley has chosen to travel on land and sea only.

“I came over here in the Queen Mary 2,” he laughs. “With every wave that hit the boat, I thought of my fans. With every chunk of vomit when I got seasick… ha! No I didn’t get sick. The trip was a little long but it was worth it, because I’m in love with London right now. I’m just absolutely in awe.”

Judging by the crowd reaction at Koko, Breaking Benjamin will find a very warm welcome at Download. He may specialise in angst-wracked anthems, but Burnley is an endearingly jokey performer onstage, apologising for the “big fat gut” that keeps bursting through his shirt buttons, and commanding the audience to “follow me on Instagram or I will fucking kill you!” He even brandishes a glowing red light sabre to introduce a punkmetal version of Darth Vader’s Imperial March from Star Wars, which heralds a ragged medley of covers, including an agreeably rowdy sing-along slamdance through Nirvana’s Smells Like Teen Spirit.

“We don’t take ourselves too seriously,” Burnley says. “We’re not hardcore rock guys, we have a sense of humour about what we do. We just want to have a really great time with everybody. We want to share the love.”

For the finale of their Koko show, Breaking Benjamin crank up the emotional heat with two of their biggest crowd-pleasers, I Will Not Bow and The Diary of Jane, the kind of supercharged heart-ripping epics that Celine Dion might sing if she was a heavily tattooed grunge-metal goddess. And yes, that is a compliment. Download festival posse: brace yourself to share the love.