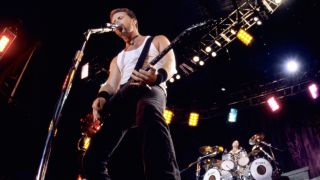 Even before Facebook, Twitter, Myspace and Bebo, metalheads were always capable of being a whiny bunch of bitches.

Is that a bit forward to start this? Apologies, but the Load album is a huge passion of mine and, in my opinion, one of the most criminally underrated rock records to ever be released, and for 20 years (yup, it was that long ago), I’ve bitched about it. I’m not under any false pretences as to why this crop of crunchy and perfectly executed biker metal anthems are dismissed. I just have a problem with it because it’s not about music, it’s about fashion and a rule book that should have been incinerated years before the album was released.

Where else but heavy metal can the sound of a barber’s clippers become more important than any sound that was made by Hetfield’s Mesa Boogie amps? Load was in trouble from the second the band cut their hair and that, my friends, is poseur bullshit of the highest degree. Don’t get me wrong: I understand having a giggle at some of those photos in the booklet when you see Kirk Hammett looking like a Cuban pimp or Hetfield in guyliner, and I certainly understand if the artsy avant garde video to Until It Sleeps stuck in your craw. Ultimately, though, all of that should have stopped the second you put that CD (remember them?) in your drive, pushed play and the piledriver of a riff to Ain’t My Bitch toe-punted you square in the front teeth.

If you checked out at ‘The Black Album’, fair enough. If the new, streamlined, ‘hard rock’ Metallica wasn’t for you, then fair play. Not liking the greasy, bluesy feel of a stomper like 2x4 is perfectly acceptable if all you ever wanted Metallica to do was ride the lightning, but if you dug Enter Sandman, Sad But True and Wherever I May Roam, I cannot fathom how you wouldn’t fall in love with the gut punching grooves of King Nothing or the slithering swagger of Cure.

It’s also, creatively-speaking, the last time Metallica experimented musically and emerged victorious (No Leaf Clover aside). The best example of this comes on Bleeding Me. Totally removed from anything else the band had recorded to that point, its push-and-pull flirtations of trippy and bluesy riffing and the solid yet unpredictable Ulrich masterclass in making the track ebb and flow, giving way to a downright evil final flourish, is indescribably brilliant.

Quite simply, it’s one of the best songs of Metallica’s whole career. Those same sinister approaches to dynamics, that patient ability to harness their power and make it explode rather than just be full-on attack, can also be felt on The House That Jack Built and superbly on Thorn Within and near-10 minute album closer, The Outlaw Torn.

It’s not without flaw. While the sentiment and songwriting, Hetfield’s nod to his love of country, is fine on Mama Said, his vocals are overblown and Ronnie comes across a little like a studio jam outtake. That’s the only flab I can find on an album that weighs in at one second shy of 79 minutes.

As I write this, I can only shake my head at my keyboard (quite literally) at how you could bitch about a song as epic (in its truest sense) as Hero of the Day. If you dismissed it at the time through it being too much of a departure from the Metallica that you knew and loved, fire up your Spotify and listen to it again without that prejudice. If a band emerged tomorrow and Load was their debut album, we’d call them the saviours of metal in 2016.

It followed up one of the most successful metal albums of all time and, doing things the Metallica way, they didn’t just repeat the formula and aim at chasing that dollar. They took their influences at the time (Alice In Chains and Corrosion of Conformity, essentially) and put their own spin on it and to hell with the consequences, and even if they do things that make me slap the centre of my bald head on occasion, that is always the thing that makes me admire Metallica more than any other band. Leave playing it safe to Maiden and AC/DC, Metallica will always do things their way and I believe that in Load they have both their biggest gamble and their biggest pay-off. If you see me at a bar, buy me a pint and ask me about this album. I can talk all night about its brilliance.

For more on Metallica in the years before the Load album, then click on the link below.