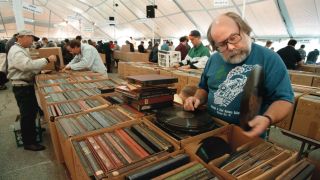 A few weeks or so ago, Classic Rock posted a request on Facebook. With the magazine about to celebrate its 200th issue, we asked the readers to tell us what they thought were ‘The Greatest Songs Of Classic Rock Magazine's Lifetime’ – that is, the best songs released between November 1998 and today.

The initial response was a teensy bit predictable: “This is going to be a problem!” sniped one response. “The best rock music was released in the years and decades before 1998 – you know, the ‘classic rock’ era?”

Another: “Classic Rock??? Since 1998? I’d venture to say mostly Classic Crap has been put out since then. … [Rock ended] with Nirvana in 1987 surfacing with the grunge scene. There has been nothing ‘Classic’ about the music industry since then. You may want to practice responsible journalism here!”

So far, so ‘People-on-Facebook-in-negative-comments shocker’, right? But even the grown-ups are saying it. Last week, Bloomberg columnist Leonid Bershidsky wrote an analysis of the decline of music sales in 2014: “The problem is not streaming vs downloading,” he tweeted. “There’s just not enough good music.”

Now, I’ve spent much of the past 10 years championing ye ancient olde music as Editor In Chief of Classic Rock. I have spent entire months of my life writing and commissioning articles about the music of 1968-1973, sent dozens of writers out to painstakingly uncover new material about records made before they were born, or hook up with guys they haven’t spoken to in decades. None of my favourite bands are still together. (Most of them weren’t together the first time I heard them.) I even wrote a blog entitled ‘Why Old Bands Still Matter and Young Bands Should Try Harder’.

In short, when it comes to supporting old rock bands, I’ve put in a pretty decent shift.

Classic Rock, after all, is the bible of this stuff. The mag was basically set up, 200 months or so ago in 1998, in response to the musical snobbery of mags like Mojo and Uncut (Dylan = god, Dokken = the devil) and the trend-hopping likes of Q and NME (this-year’s-hot-band = BRILLIANT!, everything before = BOLLOCKS!). It had a corner to fight. Rights to wrong. One of the most affecting things you take away from even half an hour’s read of Classic Rock’s 200th issue, with its 200 new interviews with 200 rock stars, from Jimmy Page to Bruce Springsteen, Ozzy Osbourne to Aretha Franklin, via members of Floyd, The Who, Quo, Heep etc is the hard-won wisdom and humility of the stars that make up this world.

So you could probably be forgiven for thinking that all of us on Classic Rock 100% agree with Mr Bershidsky: that the problem with the music industry is not about the internet, not about record shop closures or streaming versus downloading, but about something more fundamental: there’s just not enough good music.

But you’d be wrong. Of course you would be. Because we’re music fans, not just nostalgia fans. And if you can’t find any good new music you’re not trying hard enough.

Rock, in all it’s different guises, is still going strong. Issue 200 features a list of the 200 songs of the magazine’s lifetime, put together by the mag’s writers and readers. The list features every shape, size and flavour of rock imaginable: AOR, blues rock, alt.rock, glam rock, heavy rock, heavy metal, punk rock, prog rock, power pop, rock’n’roll, folk rock, stoner rock, country rock and more besides. I was asked to supply my top 20 tracks from 1998-2014. I got carried away - within an hour or so I had 149. I put that 149 in an iTunes playlist and started adding more. So far I have 264. 17 hours and 34 minutes of music. And that’s just one track from every band.

The truth is, if you put a gun to my head and forced me to make the choice – to listen to only music made pre-1998 or just music made since 1998 – I’d choose the latter. Because a) I’m excited about what comes next because b) I’m a music addict and that means that c) I’ve worn out the music from before 1998. I have listened to Hendrix, Bowie, Zeppelin, the Stones, AC/DC, Lizzy etc hundreds of times each. If I hear Aladdin Sane, Beggars Banquet or Powerage these days I enjoy them but I know every chord change and lyric. And I don’t have to hear them again for ooooh at least another decade. I have rinsed those albums for all they are worth.

Old records are powerful because of the memories attached to them – they’re the soundtrack to our lives – but equally you can play songs so many times that they are drained of significance. And I might just have squeezed every last drop of goodness from most of my ‘favourite records’.

The newer stuff, though, is the sound track to my life now. Each track in that 17 hour playlist comes with a memory attached. There’s the Chili Peppers’ Scar Tissue, the song that just happened to be playing in the car as I drove to my own wedding. There’s Life’s A Bitch by Motorhead: Lemmy pouring JD and Cokes, sticking in handfuls of ice (“‘Scuse fingers!”) and offering me drugs from the end of a knife. Just Breathe by Pearl Jam: standing on a wet and warm hillside in Bilbao, smashed on rum, as Eddie Vedder belts it out, bottle of red in his hand. Clutch’s amazing Electric Worry is Hard Rock Hell 2008 – sheer euphoria. Ian Hunter’s Words (Big Mouth) is standing outside an Irish bar in New York, half cut, smoking with the man himself (I don’t smoke).

They may just be digital files tucked away on a hard drive but each one comes complete with an emotional cookie.

Because your life didn’t stop in 1993 when you got a job or got married and stopped going to gigs. And your taste in music doesn’t have to be frozen there either. There’s plenty of great music – but if you’re looking at the charts, you’re looking in the wrong place. The good stuff is hard to find. It’s not going to ‘break through’, take over the mainstream or spearhead a new movement. It’s probably not the music your kids listen to.

But it’s there. Classic Rock can tell you where to find it. The 200 Songs Of Classic Rock’s Lifetime in this issue is a good place to start. But – and here’s the good bit – the discovery never stops. The music keeps on coming. The Classic Rock story isn’t over.

NB: Classic Rock can tell you where to find it. But you need to supply your own memories.

_If your newsagent isn’t selling issue 200 of Classic Rock, you can order it online from MyFavouriteMagazines. _

_Alternatively, you can download the Classic Rock magazine app from iTunes. _

_Special Offer: to celebrate 200 issues of Classic Rock, we’re offering a year’s subscription for just £26, which works out at just 200 pence per issue, delivered right to your door. _