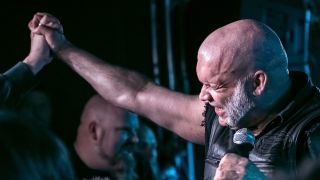 “My hero was Ronnie James Dio,” Blaze Bayley told Classic Rock last year. “He worked until he died. And that’s what I intend to do. All that matters now is that I just keep going. For me, that is the dream.”

The former Iron Maiden and Wolfsbane man is true to his word. He’s currently a few dates into an epic European tour that leapfrogs across Europe from The Balkans to The Baltic, criss-crossing the continent from Spain to Scandinavia via all points in-between, including a performance at the inaugural Heavy Scotland festival in April (full dates below).

There’s 73 shows on the schedule, calling in at rock clubs in towns so far off the beaten track you find yourself checking Google to confirm their existence (and yes, there really is a club named after Lemmy in Kaunas, Lithuania’s second-largest city). And there’s not a personalised 747 in sight.

We asked Blaze to come up with a list of his favourite Iron Maiden songs… that he didn’t sing on. And he came up with poetry.

Blaze Bayley, we salute you.

So many beautiful melodies and a melancholy vibe. I like this song so much I did my own acoustic version with Thomas Zwijsen. It feels so sad and so big and dramatic, and for me is one of the best maiden songs ever. If I want to introduce someone with no idea — or the wrong idea — about metal, this is the song I play them. This one song, above all others, proves Steve Harris is a songwriting genius.

Every big lovely powerful Maiden thing I love packed into a glorious 4 minute 37 second package. I was actually asked to perform this song at the wedding of a huge Maiden and Blaze Bayley fan. I loved singing it, and feeling the big ooohs and chorus with my own voice was so nice.

Anyone should try to sing songs they like. You don’t have to be good at singing. Don’t worry about what other people think! It’s the truest and best connection and expression of any song that moves you: Your own voice feeling the melody and the lyric in your body, and then moving it through the air as your own emotion. We all know this when we’re at a concert and live and shine with our own voice, as part of the huge voice of the crowd, lifting each one of us higher than we can reach on our own.

The Wicker Man pulls me to a small Scottish island and makes me play the fool before I am burned alive. It is the curse of this love: that even if I knew what was waiting for me, I would still go gladly to my doom because of this music.

Truth is here. A girl in Monterey, Mexico sang this softly to me in the hotel hoping it would be in the set list because it was her favourite Iron Maiden song. It wasn’t. I never had the chance to perform this giant song live while I was the band.

When you find a truth — a deep universal truth — something that everyone has felt, and put that into a lyric, then find the melody to bring that lyric to life, then find the music that tells people these emotions are real. That’s when you have the elements to create immortality in music. This song could never win a Grammy award because it is simply too real and too beautiful. All other Grammy Winners would be shown up to be egotistical self-important fakes or just very ordinary compared to a band that survived the World Slavery tour. Loneliness and regrets and missing home and feeling helpless and always moving somewhere, but never moving in the direction of home, and when you’re with them at home, the ones you miss now so much, you were waiting for something else, you weren’t really there at all, and know you cant be there. You understand but it is too late. So understand, and realise you are living in the golden years. I often have this song in my acoustic set. It feels big, raw, emotional and true.

This is greatness. This is legend. This is death. As I lay forgotten and alone, lost to all I loved and who loved me, my death is meaningless. The power and rhythm of the young men that cast this cruel spell over a million other men was undeniable. We were seduced by the power, enslaved by the rhythm, and sacrificed on a new wave of idolatry. I saw them and worshipped them at Birmingham Odeon where they made me a power slave. Again when I was lost somewhere in time. If you have never listened to this song, then I beg of you, do not listen to it now. Those of us who have are not as we were before. We cannot go back. Everything where you are now is ordinary. We have heard greatness. We have seen it. We know its name. We have fallen under its spell, and we are in love with it.

Bring Your Daughter To The Slaughter

Fun can be bloodcurdling.

It has no proper chorus and so sets itself free of any conventional song writing rules that I am aware of. An idea loyal and true to itself. Anguish melancholy and questioning your own existence and your god. A perfectly building nightmare. The shades and tones of Bruce Dickinson on this song define magnificent. The lyric is delivered on a melody that is irresistible until it becomes ominous. Then he lures me towards the centre of his nightmare.

An impossible song. Too fast. Too high. Too catchy. Too uplifting.

Popular with Maiden tributes, but very rarely can any of those happy-hearted hopefuls ever get close to the precision required to get near to the original album recording. It has alway felt to me that Iron Maiden were proving something to themselves with this song. I’m probably wrong and I’ve never had a conversation with any of the guys in the band that would back up or justify my opinion. But I stick with it anyway.

I like to imagine them in the rehearsal room being really fed up with Judas Priest and coming up the greatest song ever written about the Battle of Britain. There was a momentary space and time anomaly on the afternoon they wrote it. From 1940 Winston Churchill glimpses a possible future where five free British men gather to write a song celebrating victory. In 1984 five of the finest musicians Great Britain has ever produced feel Churchill’s frustration as the future of our nation is almost lost. Churchill tells his cabinet ministers he will die spitting blood on the floor of the House of Commons rather than surrender. In the rehearsal room Steve Harris shouts across the room to his drummer, as the guitar solo approaches, faster Nico!

Nico finds the extra speed for the song, as the spitfires in the skies found the extra speed courage and determination to stop the evil that threatened to engulf Churchill and the country he led on those dark perilous days between July and October in 1940. We will never surrender.

Run To The Hills

The future is here. Back then. But now.

Listening to this as a young man on headphones on my parents stereo felt a little bit awkward . I started to have the feeling that this music would break the stereo, because it was so different to the Satchmo my father listened to. Dickinson was the future voice of maiden. It was 1982. This song still gives me some of the excitement of the first few times I heard it even now.

Hallowed Be Thy Name

A huge and powerful lament. The condemned man at the centre of this masterpiece does not protest his innocence. Instead, he admits his fear of his own imminent death and his dread of the unknown. As verses end the music takes through the agony of the the last seconds and to the final breath of the hanging man. The death rattle, and it leaves me with the feeling that there is a human soul that has escaped the tyranny and injustice of his age.

The Bruce Dickinson version, not the original studio version. Does what it says on the tin: Iron Maiden’s gonna get ya, no matter how far.