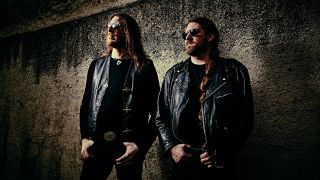 Seeing as the Romanticism movement took its cue from Germany, you’d expect a country to produce a lot more of the kind of open-hearted black and post-black metal that’s characterised the likes of Winterfylleth, Agalloch, Deafheaven et al. Making a clear case of quality of quantity, however, Black Forest dwellers Imperium Dekadenz, alongside their Bavarian compatriots Der Weg Einer Freiheit, are drawing upon their cultural past to paint their emotional, nature-communing screes upon the vastest, most transformative of canvases.

Due to be released into the yonder via Season Of Mist Records on August 26, Imperium Dekadenz’s fifth album Dis Manibvs - a title derived from antique Roman grave markers translating from Latin as ‘To the Spirits of the Dead’ and basically meaning ‘In Remembrance’ - marks a huge leap from 2013’s Meadows Of Nostalgia. Adding breathtaking new textures, and unclenching themselves from their more traditional if still emotional black metal roots, the duo have embarked on a thrilling new and open-ended path, and we have an exclusive preview in the glorious, stargazing form of the track Now I Rise. Riven by huge, billowing riffs, melancholic yet monumental, it’s an near eight-and-a-half-minute epic that’s part anthem, part mournful pilgrimage and ultimately and uplifting rite of passage whose final refrain is a luxurious payoff of spine-tingling grace.

“Still I Rise,” comment the band themselves, “deals with the constant mental development of people unwilling to be part of the grey and stupid mainstream crowd. This development is only completed on our very last day. We walk our own individual paths and we all know the difficulties and resistance. But we also know our enemies, and they will never bring us down!”

Lose yourself in the forest, glimpse the boundless cosmos through the branches and foliage above and have yourself a wee moment of reckoning to Now I Rise right here!