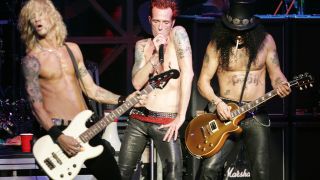 The saviour of rock'n'roll sparks up a Marlboro and slumps on to the bed of his hotel room in Boston, Massachusetts. It’s been a good year for Slash. He doesn’t need Classic Rock to tell him that, but we do anyway – and he’s humble enough to shrug it off.

“I take being told how great we are with a grain of salt,” he says as he exhales a plume of smoke, “but I’ve accomplished things with this record [Velvet Revolver’s Contraband] that make me feel I’m getting a little better. I’m proud of the past, but what I’m doing right now is the best I’ve done so far.”

Morale is high in the Velvet Revolver camp. The Contraband debut album continues to do brisk business across the planet, burning itself deeper into our subconscious with each spin, and swaggering on to Classic Rock’s Best Album of 2004 podium with ease. It’s vindication for a band they said wouldn’t last, and Slash’s scorched laughter is laced with glee.

“I fuckin’ love working with these guys,” he says with a broad smile. “I can’t pick a highlight because everything has been a highlight this year. We’re still in the midst of it. And we’re writing some cool shit. We’ve grown together so much; the next record’s gonna be really fuckin’ hot.”

Nor is this a pharmaceutical high: “This isn’t what you might call the fuckin’ sober band of the century, it’s just we’re not as fucked up as we used to be,” he grins. “I’ve been doing this long enough to know that three girls with no panties on, wanting you to do four grams of blow is not gonna help. To come through the sex, drugs and rock’n’roll roller-coaster unscathed and still have the passion to play is awesome.”

And few could doubt Velvet Revolver’s passion. Following a fiery live debut this year, the band will return to the UK in January for a lap of honour.

“Well, I’m from there,” Slash points out, referring to his British origins. “And my thing is to go to where the real people are. If they don’t think you’re the shit they won’t give you the time of day.”

“No, it’s been too long,” Slash insists. “I’ve been out of that band for eight years. Y’know, Axl wasn’t solely responsible, but he was one of the catalysts for breaking up a fuckin’ great band, and a lot of it had to do with musical direction. So when he comes out with his record, we’ll just wanna see what he wants to express. That’s gonna be interesting.”

**This was published in Classic Rock issue 75 **