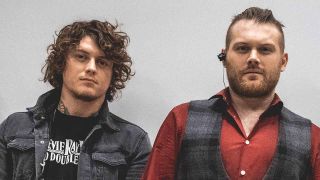 As the world was busy falling into a global crisis, Asking Alexandria offered a glimmer of excitement in our largely uneventful summer with the release of their sixth album, Like A House On Fire. While we all isolated in our homes, we gathered chief mischiefs Ben Bruce and Danny Worsnop on a conference call to find out their views on coronavirus, non-alcoholic beverages and how Danny ended up cursed.

Ben Bruce: “I’m excellent! I’m pretty convinced the coronavirus worked its way through my family. We didn’t get tested, we stayed at home, but my mum called 111 explaining my symptoms. My kids had really high fevers to the point we had to take them in, my lungs felt like someone was squeezing them closed but we’re all over it now!”

Danny Worsnop: “I’m wonderful, I’m getting older and fatter as the days go by. I’ve just been at the gym for three hours… you can take a lot of pictures in three hours.”

Ben: “Danny’s been working really hard on getting healthier and healthier. He’s losing his waistline and his hairline…”

Ben: “I’m gonna say Danny. I’m not much of a fighter and nor is Danny, but he’s at least a bit bigger than me.”

Danny: “The winner would be whoever our wives decided was right.”

Ben: “Mine loves me being wrong so this could be an interesting fight. Can you call us back next week and let us know who won?”

Now that you guys hardly drink, can you recommend any non-alcoholic beers? They all taste like piss. James Ennis (email)

Danny: “There aren’t any, even regular beer tastes like piss.”

Ben: “There are some, Danny! We’ve got a friend who’s currently going through chemotherapy so she’s not drinking and she’s discovered the non-alcoholic Heinekens taste pretty good, which is funny because normal Heinekens are pretty crap. Apparently Heineken 0.0 is the best of all of them, so maybe Heineken are just using crap alcohol.”

Danny: “Don’t tell anyone it’s non-alcoholic though, that’d be weird.”

When was the last time you had an argument and what was it about? Rob Shaw (email)

Danny: “I’m assuming you mean between each other but in general, all the time. We have our little arguments, but I don’t remember the last time we had an actual argument.”

Ben: “We’re both pretty rational, but I’m a lot smarter and cooler than Danny so fuck you Danny.”

What tricks do you use to keep your vocals fresh during periods of extended, heavy use? @hirulepipehitta (Twitter)

Danny: “Toothpaste is the joke answer, the real answer is they’re permanently under that stress. Your body needs breaks from that strenuous activity. I treat them the same as any other muscle where I use it every single day for extended periods of time and I keep it trained, keep it loose, keep it moving.”

Ben: “Yeah, he never shuts the fuck up. People say if you’re screaming correctly, there should be no issues with your vocals – fuck you, are you serious? It’s like saying if you punch the wall correctly, your hands should be fine.”

Ben: “The people who say that have been doing it for a little while and haven’t yet realised the damage they’ve done to their vocal cords.”

How have you guys survived the coronavirus situation? Any tips for general boredom? Jackie Warren (email)

Danny: “I’m surviving. I’m pretty reclusive and I know a lot of people are joking about that but what I’m about to tell you is my current schedule during quarantine is the exact same schedule as when we’re not quarantined. I wake up, I work out, I record the podcast and then I go in my studio and work on music – we just started doing Twitch streams so I do that – then I work a little bit more. Through the day I eat and hang out with my wife, then I go to bed. My schedule hasn’t changed!”

Ben: “I think I’m the cure for the boredom – I’m posting quality content on Instagram and I’m my own entertainment at this point. I was making something on my phone yesterday and my wife asked why I was laughing. I was laughing at myself, I’m just so funny right now it’s unreal.”

Danny: “They call that cabin fever…”

Would you rather have legs for arms or arms for legs? Hannah Nash (email)

Ben: “I’d rather have arms for legs. Wait, does that mean I have two arms on the bottom and two arms up top? So it’s like do you want four arms or four legs? I’d take arms any day. Imagine how fast we could climb things, Danny.”

Danny: “The only reason someone would want four legs is if your profession is to kick things or run and your favourite food is cereal.”

Ben: “If you fancy a culinary challenge then maybe you’d want four legs.”

What’s the weirdest thing a fan has ever given you? Becca Daly (email)

Ben: “I don’t think we could call it a fan but we spent an hour and a half outside the bus trying to burn this horrible curse someone cast on Danny and the paper wouldn’t burn! It was written in some crazy witch language and we didn’t know what to do. It started off as a joke but then we got concerned and someone was like, ‘Burn it!’ So we tried and then realised burning it is probably the worst thing you could do but it wouldn’t burn! Since then, Danny’s hair’s all fallen out…”

Danny: “I’d forgotten about that, that was fucked up. Before we did meet and greets, back in 2008, we were going out to the merch table and meeting fans ’cos there were only like 20 of them per show. Someone pulled a knife out and asked me to carve my name in them.”

Ben: “Someone did present their penis to sign and rather comically handed us one of those mini Sharpies to sign it with. We couldn’t have done that today.

Ben: “Danny isn’t in country mode ever so I don’t have that problem. Normally it’s me turning up with stirrups on and Danny has to go, ‘Ben, those shoes are way too loud to record in.’”

Danny: “I think people think I’m a very different person than I am just because I did one country record.”

Ben: “I wouldn’t even call it country, it was just a singer-songwriter album.”

Danny: “People have a warped view of what country music is. As far as being a country person, I was born and grew up in the country, I lived as far out of the suburbs as you can without getting into the country. I’m from a country and I live in a different country now.”

Ben: “So you’re double country… now you can see where that confusion lies, Danny.”

Danny: “I have two countries and I am a… well, you can fill that bit in.”

Ben: “I see what you did there, you called yourself a cunt!”

Who in the band would be the first to die in a zombie apocalypse? Ryan Skinner (email)

Ben: “Cameron [Liddell, guitar] because he’s so oblivious to everything going on around him, he’d be half eaten before he even realised there was an issue.”

Danny: “Plus his car’s super-slow so he wouldn’t be able to get away.”

Ben: “I hope he reads that and gets very upset.”