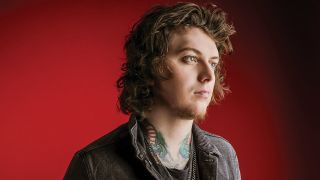 “It’s almost like this is our first album again,” admits Asking Alexandria guitarist Ben Bruce. “We hit our rock bottom and started again.”

When singer Danny Worsnop returned to Asking Alexandria last October, fans rejoiced that the classic lineup – founder/guitarist Ben Bruce, Danny, guitarist Cameron Liddell, bassist Sam Bettley and drummer James Cassells – had reassembled and were talking about new music. Yet even as fans hailed the reunion with dewy-eyed ecstasy, it was clear that over the past two years – a period during which Ukrainian vocalist Denis Stoff fronted the band and they released 2016’s The Black – AA’s progress had stalled; venues grew smaller, and instead of carrying their own headlining tours they found themselves opening for the likes of Parkway Drive.

So when AA finally hit the studio this past spring, they faced the very real task of rediscovering their musical identity. After all, it had been four years since this lineup had written anything together. Moreover, Danny had released two albums of decidedly non-AA material – his country album, The Long Road Home, and We Are Harlot’s 80s-inspired, self-titled rock album. His recovery from his highly publicised battles with alcohol and drug addiction had also coloured his perspectives on not just the future, but his own dark past.

Could they pick up from where 2013’s From Death To Destiny left off, as if no time had passed? Hardly. What would be the point? The Black had already cemented AA’s mainstream aspirations – there was no going back. As the five guys entered the writing phase of their fifth album, their most important task was answering just one question: who are Asking Alexandria?

On December 15, the world will find out, when they release Asking Alexandria – easily the poppiest and most polarising statement of their career. Bursting with glittery choruses, skyrocketing atmospherics and ginormous pop hooks, the new album is as controversial as it is catchy, due to its unabashed mainstream appeal.

“I’ve always thought we need to push the envelope and better ourselves with each record,” says Ben. “I looked at everything we’ve accomplished and I thought, ‘I want this to be bigger. I want this to be better.’ I wanted it to be more exciting than anything I’d done before, so I set the bar to our previous records and asked, ‘What did we accomplish on those records and what songs really spoke to me? Now, how do I top that?’”

“It felt like 2008, when we did Stand Up And Scream,” Ben says. “While that’s a very different album to this one, the headspace we were in was that we were excited. We just created an album as five friends, because that’s what we love to do, and we were excited about it for the right reasons. That is how this new record felt. There was no fear – it was nothing but the album and the five of us, and that’s all that mattered. It was the most enjoyable record I’ve made.”

It begins with Alone In A Room, the start of a three-track story following Danny in the wake of his 2015 departure.

“It’s looking back on writing my first solo album,” says Danny. “I sat down to write it, and for the first time I was by myself. That experience of being in a room, alone with my own thoughts, forced me to face things that I wasn’t comfortable with and that I’d been keeping down inside. That leads to Into The Fire, which is about coming to terms with accepting myself. I’m an addict, and if I can keep myself away from the drink and drugs, my addiction can be bettering myself. It can be working on my business and my music and my health; trying to recover what I can after years of destroying myself. From there it’s Hopelessly Hopeful, which is the song about where we’re at now that I’ve put all my chips down. I’ve gone all in, betting on me, hoping I’ve done the right thing and that I’m right about myself.”

On one of the darkest tracks, Room 138, Danny revisits his near-fatal overdose in a motel several years ago. “It’s written from that point of reflection when you think you are going to die,” he explains. “I couldn’t move. I was convinced that that was it. There’s so much going on in your mind at that time. It was a very scary song to write.”

Today Danny is several months sober, brimming with a newfound sense of ease. “I feel incredible,” he says with pride and relief. “I’m an addict, period, so I replace one thing with something else. That went from heroin into cocaine. Now I’ve turned it into a positive because I spend my time in the gym. Possibly too much, but I work on myself and my health and that hopefully is the balance I’ve found.”

In a change that had less to do with consciously charting a new direction as simply shaking things up, Asking Alexandria marks the band’s first release without producer Joey Sturgis. This time they turned to Matt Good (From First To Last, Memphis May Fire).

”It wasn’t because Joey’s not good, or because I didn’t enjoy writing with Joey; it was because I wanted to work with someone else who might be able to push me in a different direction – and that’s what Matt did,” says Ben. “I went into the studio every day with no ideas. He’d click record and say, ‘Play whatever you’re feeling.’ If I was angry, riffs like the ones in Eve would come out, and if I was in a joyful mood, I’d riff around on my guitar and something like Into The Fire or Rise Up would come out. It was fun for me to go in there blindly and to create for the sake of creating, instead of being told what to do, like painting by numbers. This time I had a blank canvas and I threw paint at it.”

Then there’s Empire, a bold pop anthem featuring hip hop verses from Bingx, an up-and-coming rapper whom Danny describes as “a fucking genius. He’s incredible and he’s a very nice kid and it just made sense. He worked super-quick and blew us away.” It’s the kind of track that has the potential to sit in the Number One slot for many weeks while simultaneously infuriating longtime metal fans who were hoping for a return to Stand Up And Scream.

Jamming the album in full, it’s clear that the Yorkshire metallers have set out to conquer the mainstream, but at what cost? Linkin Park offer an apt comparison; their third record, 2007’s Minutes To Midnight, saw the megastars step beyond their heavy roots with a radio-friendly clutch of hyper- polished pop. It sold millions of copies, but at the expense of some of their oldest fans, who saw the change as a form of betrayal. We raise this parallel with the band, who are more than happy with the comparison.

“I’m sure Linkin Park didn’t notice three empty seats in the back when they were playing Wembley! Ha ha ha!” cracks Danny. Taking a more serious tack, he continues, “We know we could disappoint some people. But our other albums still exist – they haven’t been pulled off of the shelves!”

Ben adds, “We created a record that we love and if people want to come on that journey with us, great, because they’re going to have an incredible time listening to it. But like Danny said, if you prefer Stand Up And Scream or Reckless & Relentless, they’re still on your fucking iPhone.”

If Asking Alexandria does bring them massive success, then everything that has happened to them, both good and bad, will have played a vital role. With all that’s transpired, however, AA fans might be forgiven for wondering if or when the other shoe’s going to drop. Both guys insist, however, that in setting aside time for outside pursuits, they’ve positioned Asking Alexandria for a long and successful run.

“To me, Asking never takes a backseat,” says Ben. “But what we’ve learned is that it’s important to not just push and push and push. We’ve figured out that it’s important to give Asking time to breathe. Right now we’re in Asking mode, and we’re taking it very seriously and doing everything we can and we’re enjoying it, but we know that there will come a time when we’ve been on tour for a year or two in support of this record where instead of forcing another one, we’ll be able to sort of step back and concentrate on other things that we enjoy doing as well, and incorporate those things into our lives without damaging Asking Alexandria.”

Danny points out that smarter touring and more time off will not only pay rich dividends for the band, but for the fans, too.

“The way that the band is set up now, everybody has time to do everything they want to do. We’ll go out for a month, then take a couple months at home. Then we’ll go back out, then take a couple of months at home. We can make it so that every time we set foot onstage we’re fresh, we have energy and we want to be there and we’re able to put on the best performance we can because we’re not fucking exhausted.”

Five albums in, AA now feel like they’ve only just begun. “It’s a new chapter,” Danny says. Ben agrees. “For all intents and purposes, this is Asking Alexandria – the five core members back together creating music together again for all the right reasons, just like when we started.”

Which is why they’ve titled the new album Asking Alexandria — because after nine years, they can finally answer the question about who they are. “It just makes sense to start our new journey with our name,” says Ben. “We’re Asking Alexandria.”

Asking Alexandria is out December 15 via Sumerian. They tour with Black Veil Brides in January

In the studio with Asking Alexandria