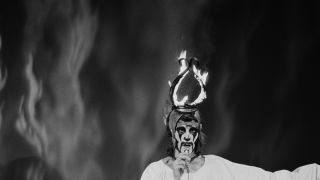 Arthur Brown is one of rock's greatest characters. To prove the point we've culled these quotes from Classic Rock and Prog.

“Anybody down there on acid – and there must have been a few – seeing this figure flying down with flames coming out of his head must have thought God was coming.” - on making a spectacular entrance at London’s Roundhouse from the roof

“I’d come on holding a mop, with a bucket on my head, and pretend to be the Statue Of Liberty.” - on the birth of his stage act

“I’d come on holding a mop, with a bucket on my head, and pretend to be the Statue Of Liberty.” - on the birth of his stage act

“My hair was singed many times, my clothes caught fire once, and we were always leaving burn marks on stages. But my face only got burnt on a couple of occasions,”

“I haven’t yet been asked to take part in that festival. Maybe they’re worried I might do it naked!” =- on why he’s not done te Glyndebourne Opera Festival yet, even though he lives close by

“My father was a very conservative man for almost all his life. But when he was at retirement age, he suddenly decided o become a punk! He dyed his hair, and totally embraced the idea of punk. So maybe that’s where I get my feelings for staying young, and in touch with what’s happening in the world.”

“I once performed at a gathering of the British Communist Party. I spent so long listening to the rubbish they spouting that I came onstage and told them it was all a lot of nonsense. I survived.”

“I know a farmer,. Four times a year at equinox, he finds one of his sheep decapitated.”

“In the Crazy World, we didn’t do a lot of songs about fucking. Apart from one number where all I did was shout ‘Fuck!’ for 20 minutes.”

“I remember spending one night with Vivian Stanshall and Robert Calvert. That was an odd night. Vivian ended up chasing Robert down the road while dressed in a nightshirt and hat!”

There’s a feature on Arthur Brown in the new issue of Prog, on sale now