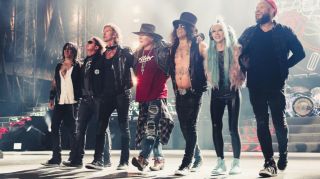 “This permanent A list rock group has apparently agreed to do something they said they’d never, ever do. Make another record with (most of) the original lineup. They just signed a deal with one of the top five most famous producers of all time to take the helm of the project. Among his stipulations was that every member of the band cede control to the producer, and if any single one member of the band departs or screws up? It is over. According to one member, no more half-hearted collaborative efforts for that band. At this point, why would they even try? Aside from the expense of paying off past lawsuits and alimony, they want the money. Apparently all that recent concert money they’ve recently earned has reminded them they were once that good. This should be interesting.”

Crazy Days and Nights is – as gossip sites go – a pretty reliable source. It broke the story of the Harvey Weinstein scandal long before the mainstream press got hold of it, and it’s unusual in that it publishes reveals after its blind items have been proven true (and retractions when it gets it wrong).

So the item above set alarm bells ringing – a famous rock group is reuniting with a top producer to record a new album, which they said they’d never do. There are only a few bands who could conceivably meet the criteria – Rainbow, Mötley Crüe, The Smashing Pumpkins – and only one that you’d really describe as “permanent A list”, with the mainstream recognition that implies: Guns N’ Roses.

There’s some compelling circumstantial evidence that it is, in fact, GN’R. The band’s been unusually silent since wrapping the last leg of its Not in this Lifetime tour, with Axl Rose, Slash and Duff McKagan keeping a low profile.

That’s odd, because they have no shortage of side projects on the go. Back in March 2017, Slash and the Conspirators lead singer Myles Kennedy was talking up the possibility of a new Slash solo album: “Yeah, there’s been talk of that. I think it’s just a matter of when everybody’s schedules can make it so that can happen […] it’s just a matter of when that window comes.”

By January, Kennedy was concentrating on his solo record and prepping a small acoustic tour for March 2018 – this despite the fact that the third Slash and the Conspirators album was “90 per cent completed” in 2015 and the guitarist has five months of downtime before GN’R hits the road again.

Duff McKagan’s side project, Walking Papers, released their sophomore album WP2 at the end of January – with Duff nowhere to be seen. “There’s some opportunities that are starting to drop in for the touring and we’ll take that as it comes,” said frontman Jeff Angell. “I don’t think Duff’s available. He’s got a cash machine over there that he’s got to tend to.” Instead, the band’s playing a handful of live dates with Evan Flory-Barnes filling in for McKagan. Meanwhile, GN’R’s long-time keyboard player Dizzy Reed wrapped a short tour at the end of January, and only has one other date lined up: an album launch party at Frankie’s Pizza By The Slice in Sydney, Australia, this month. Beyond that, the band’s schedules seem to be completely open until the Not In This Lifetime tour revs up again in June this year.

Tellingly, the Guns N’ Roses Twitter account only follows 41 other accounts, one of which is Rick Rubin – unquestionably “one of the top five most famous producers of all time” (Rubin, incidentally, recorded a cameo appearance alongside McKagan in a music video released in December 2017, and was involved in the early sessions for what became Velvet Revolver’s Libertad).

So there’s a lot of smoke, but no fire. If Guns N’ Roses really are going back into the studio, they have no shortage of material to work with. “I’ve always thought of [Chinese Democracy] as a double,” Axl claimed in a 2008 web-forum chat with fans. According to Sebastian Bach, Rose has “like, four albums done. I’ve heard it” – though Axl himself says there’s “Not as much as Baz thinks he heard.”

Regardless, Axl’s confirmed the existence of songs with titles like The General, Atlas Shrugged, and Elvis Presley And The Monster of Soul (“our most Black Sabbath moment” and “the meanest section of anything I’ve sung to date”, according to Rose). Intriguingly, he’s also worked on a song titled Down By The Ocean, co-written with Izzy Stradlin – though given the acrimony between Izzy and his former bandmates over the reunion (“They didn’t want to split the loot equally”), it’s anyone’s guess whether that one will be dusted off.

The rest of the band has plenty of unused material, too. Back in 2003, they recorded “10 or so” tracks with Izzy Stradlin for The Project – the band that would eventually become Velvet Revolver. Slash has called it the best Guns N’ Roses album Guns N’ Roses never made; it was largely abandoned when Scott Weiland signed on. Slash and Duff also recorded around ten songs with Corey Taylor for an abortive Velvet Revolver revival that never got off the ground – though how many of those song ideas later ended up on their solo albums is open to question.

Guns N’ Roses has also been setting down ideas for a new album while on the road, with guitarist Richard Fortus noting that, “We’ve been recording a lot of stuff, just ideas, sort of assembling ideas, but not going into a studio and actually tracking a new record.” Asked whether the band would consider releasing a new album, Fortus said: “Yeah, I do. It’s sort of too good not to happen at this point — that’s how I feel about it. This band is really a force right now, and I definitely hope that we do, and I think we’re all sort of counting on it, and we’re also planning on it.”