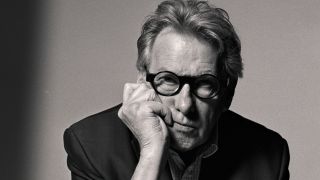 “I was brought up a Methodist, so we sang a lot of hymns and went to chapel every Sunday twice when I was growing up in London. We sang hymns as they do in Welsh choirs, with lots of enthusiasm,” says Andy Mackay to Prog during a break in rehearsals for his Psalms 3 concert at the Queen Elizabeth Hall back in November.

“Methodism was the Anglican or the British equivalent of gospel music really,” he continues. “I’m sure that was an influence on me.”

For Mackay, making and enjoying music has always been an act of inclusivity rather than something to be dogmatic about. His new album 3 Psalms reflects this lifelong approach, and includes an almost kaleidoscopic swirl of stylistic traits and influences that feature elements of church music, electronica, classical music, jazzy daubings and a subtle rock undertow in places. Utilising a string orchestra and choir – who also joined him at the live show – the album very much reflects Mackay’s love of classical music, which dates back to his days learning oboe and being an eager devotee of the Proms concerts at the Royal Albert Hall as a teenager in the early 60s.

“I still want to see this music in the context of rock’n’roll,” he explains. “I’m a rock musician. I’m not actually a classical composer. They have a much more rigorous and disciplined approach to music than I do. I just write and play the music that feels right to me and it reflects my varied musical background. But I still feel that this is a rock album.”

3 Psalms may be recently released, but its genesis dates back to the mid-90s. It was also very much a personal challenge for Mackay.

“I was terribly excited because I’d got the new music software which was around then, which was Cubase working on a second-generation Mac with a 1GB hard drive. It was considered quite miraculous at the time,” Mackay remembers. “So I got excited about the idea of samples and loops and so on. I wanted to work with a human voice so I wanted something that was speech-based. I’ve never been comfortable writing lyrics. I can’t quite get the balance and simplicity without it sounding a bit banal. I thought I’d use someone else’s words and it ended up with the Psalms. Initially, it was Psalm 130, ‘Out of the depths’, which appealed to me because it seemed like a movement from despair to hope. Which, in the mid-90s, seemed right. My personal life had been had been quite difficult at that time, and writing the music around Psalm 130 was a good way to focus.

“Then I added the other two to sort of make a symphonic set up so it has three movements. There’s a reflective, slightly doomier Psalm to start with, then Psalm 90, which is really about human mortality: ‘the days of our years are threescore years and 10,’ and ‘you are dust and to dust you will return’, all of that stuff.”

Mackay came face to face with the spectre of his own mortality in 2017, when he was successfully operated on after being diagnosed with throat cancer. The addition of Psalm 150, which he says is basically about feeling part of a bigger universe, gave the piece a three-movement shape, and a running time of around 40 minutes felt right to him.

Outside of Bryan Ferry’s career, when it comes to Roxy Music members, Phil Manzanera’s solo work tends to garner the most attention. Albums such as Manzanera’s 1975 solo album Diamond Head and his band Quiet Sun’s sole album Mainstream, both recorded alongside each other at the same time, as well as prog rock supergroup 801’s 1976 release 801 Live, have been rightly revered over the years. Mackay’s solo output, by comparison, has been largely and unfairly overlooked. His commissions for television included theme music and the songs for Thames Television’s Rock Follies, whose soundtrack promptly netted Mackay a No.1 hit album. Yet away from his work in television, his solo albums have never yielded the attention they have deserved. 1974’s In Search Of Eddie Riff was a glittering, glitzy and deliberately kitsch celebration in the style of a fictional 50s instrumental idol, and contained some fun rock’n’roll settings of Schubert and Wagner. Also lurking amongst the brash riffs, warbling organ and twangy guitar there was also the enigmatic Proust-referencing Time Regained, in which a chorus of overlapping tape-looped saxes connected with Terry Riley’s time-lag generator and Eno’s Discreet Music.

Mackay’s next solo album, 1978’s Resolving Contradictions, offered a pan-cultural observation on life in China inspired by his visit there. Alongside grand themes, orchestral strings and incipient funk-tinged grooves, Mackay’s saxes and oboes described fiery lines in taut arrangements that reconciled notions of Western rock and Eastern sensibilities. While Mackay and Phil Manzanera’s 1980s joint project, Explorers, veered towards the more mainstream songwriting avenues, the sax player's desire to bring wildly contrasting elements together was central to perhaps his most overlooked solo undertaking, Andy Mackay And The Metaphors. The six-tracker, London! Paris! New York! Rome!, released in 2008, was an exquisite post-rock travelogue of tunes from the American songbook such as Three Coins In The Fountain and New York, New York, and a stunning, spacious resetting of The Kinks’ classic, Waterloo Sunset. Shimmering waves of processed guitar, ethereal oboe, trickling piano and the tolling chimes of Big Ben create an ambient-style sound portrait of the city and the song’s two star-crossed lovers that is both touching and revelatory. It's a project for which Mackay still harbours a great deal of affection.

“I was really enjoying it, but I’d intended to make that more of a live thing. But then, for various reasons, we couldn’t quite get it working live due to logistical problems. I always seem to choose difficult instrumentations to work with because we had a concert harp player, another Roxy player Julia Thornton, who was with Roxy in 2001. So we were carrying a harp around as well as Paul Thompson’s drums, and we had an experimental keyboard and synthesiser player. It ended up being more complicated because we were spread about: Bristol, East Anglia, Newcastle and so on. So for various reasons I couldn’t take it as far as I wanted.” Also included on the record is a darker arrangement of Roxy Music’s Love Is The Drug.

That song, which hit the top five in singles charts on both sides of the Atlantic, is being revisited once again by Mackay as part of his Queen Elizabeth Hall concert along with other songs from Roxy Music's repertoire.

“I sketched out some of the ideas but largely it’s down to Lucy Wilkins who played violin in Roxy Music and another old colleague of mine, Ray Russell, who worked with me on Rock Follies,” Mackay explains. “They’ve come up with some arrangements which are much more unusual than most rock-meets-classic collaborations. Quite often in effect people will just play keyboard parts on strings, but what we’ve done is things that can only be done with real strings: like playing with the back of the bow bouncing on the strings, playing without any vibrato and playing harmonics and very strong attack or very quietly. There’s a whole range of sounds that you can get, and when there's a 16-piece string orchestra doing that you do get a big lift that you really can’t reproduce on anything else."

The idea of adapting Roxy Music songs for 3 Psalms live came fairly late in the day as the date for the concert began to loom.

“Because Phil Manzanera was going to be guesting at the 3 Psalms concert, I thought since we were all going to be in the same room I decided to use the choir and orchestra and work on Roxy Music songs,” Mackay explains. “I think this is a great way of digging out some of the ways Roxy worked in the middle period, certainly. Quite a lot of the songs we’re doing are the ones that I co-wrote. One of them is a version of //A Song For Europe//.” The fact that the piece is being performed at a time when Britain’s political antipathy towards the European Union is not lost on Mackay. Playing the tune now has an unmistakable melancholy resonance with the current situation, he says. "You think, ‘Well, where are we going with Europe?’ It looks like its going to be a tragedy whatever happens. So there’s a slightly tragic quality about it."