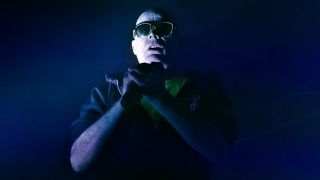 Three years have passed since The Sisters Of Mercy last released new music, but they remain revered by thousands of loyal fans who flock to their shows to this day. Frontman Andrew Eldritch, often portrayed as rock’s mercurial lord of darkness, turned out to be a perfectly talkative, approachable and highly eloquent interviewee who patiently elaborated on his favourite topic of politics – and the one event that might persuade him to put out a new album.

Hello Andrew, how are you?

I’m fine, thank you. I’m on holiday in Italy and looking out to sea at the moment. It’s just a shame my Italian isn’t what it used to be.

Well, Lemmy and Bowie … in my small crazy world they were both very important, so both were big losses. Even if I have to say that Bowie hasn’t released music that touched me in quite some time.

Whenever the topic of the Sisters Of Mercy comes up, the question has to be asked: fans have been waiting for new material for over 20 years – are they ever going to get it?

Well, the fans have been hearing our new material for over 20 years at our concerts. And of course we’re incredibly grateful that they keep coming. The main problem with a new album is that I don’t want to blackmail my band into doing it for free. It takes a lot of work and effort, and in this day and age music unfortunately no longer seems to have any value.

On the one hand nobody wants to pay for it anymore, on the other the information overkill has led to a world in which mainly music devoid of any content is consumed. Add to that the fact that I haven’t spoken to the label in years and vice versa. I have thought about crowdfunding, but nothing is decided. I’m just glad people still listen to our old songs so much. At least in this respect the streaming boom has been advantageous for us. But we’ll see.

What’s your take on recent political developments back home? You refused for many years to return to the UK, but now you live there at least half of the year.

A few things did change for the better. But I won’t deny that I’m anything but happy with the current government.

No, I wouldn’t say so. Thatcher can be blamed for virtually all the problems we face now. She’s to blame for the Tories we have today, but also for Tony Blair and New Labour. Cameron is nasty, but Thatcher was just plain evil. She destroyed entire industries out of pure vindictiveness and spite.

That may be true. Of course the sceptics aren’t wrong when they say the EU desperately needs reforms, because it does. But I still believe in the values the European idea was built on and hope that the majority of the people will see it that way in the referendum too.

What about the US elections? You’ve always closely followed developments over there.

What is happening in America is an ever more bizarre circus, and the population doesn’t seem to realise just how much it’s being taken for a ride. I can tell you one thing: If Donald Trump actually does become President, that will be reason enough for me to release another album. I don’t think I could keep quiet if that happened.

At least you’re giving us a silver lining to some very dark clouds. But if things turn out differently and no new music of yours ever sees the light of day again: are you satisfied with the recognition you’ve received over the course of your career?

For a while there was actually too much of it! I was never especially interested in being recognised in the street, that’s actually rather annoying. The one and only thing I care about is that the songs are respected. Apparently that’s still the case, so I can’t really complain.

Cats, Goths & The Sisters Of Mercy: An Audience With Andrew Eldritch