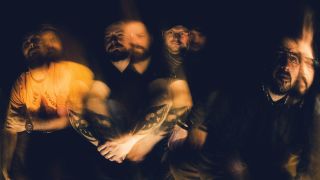 Think of instrumental concept albums and you might find yourself gazing wistfully back to the 70s heyday of symphonic rock. Taking their cues from orchestral programme music, Camel’s The Snow Goose and Bo Hansson’s Lord Of The Rings and Watership Down were all ‘inspired by’ literary fiction. With The Six Wives Of Henry VIII, Rick Wakeman took history as the inspiration for his sonic portraits. The Enid turned to the tarot for In The Region Of The Summer Stars. Now, Geordie lads Kylver are following in their footsteps.

“The idea to add the story to the music was to give the listener something a little more than an album with just a list of songtitles,” he explains. “We found with The Mountain Ghost that people really attached to it and created their own story in their heads to go with the loose narrative that we had given.”

Kylver take their name from a runestone that was inscribed around 400AD in Sweden. “We all have an interest in folklore and history,” Scott points out. “The original idea for The Mountain Ghost came from this little wooden head that I picked up in a mountain village called Zermatt in Switzerland. When you walk around the village you see these wooden carved heads on the front of houses and you think, ‘What is that for?’ A lot of the shops sell them and I found out that they’re to keep away evil spirits called ‘mountain ghosts’.”

For latest album The Island the quartet have imagined their own fictional folklore, inspired by mythology. “The Great Storm Of 1703 was the first track we wrote”, says Scott. “We were talking outside the local bar across from the practice room about what it made us think of. Me and Barry [Mitcheson, drummer] said it made us feel like we were on a ship in a storm, an old galleon-type sailing ship. It started to develop from there. We knew it was going to be a ship looking for an island so that tied in with Hy-Brasil, that mythical island off the coast of Ireland.”

The shipwrecked protagonist of The Island encounters monoliths and a portal commanded by mysterious figures dubbed as ‘The Great Race’. It’s a world that conjures up tales from the Cthulhu mythos of horror author HP Lovecraft.

“Dagon is one my favourites,” the guitarist enthuses, citing Lovecraft’s 1917 short story. “Lovecraft’s writing has few actual descriptions of the aliens or beast or whatever. It’s never physically described to the point where you have a clear picture of it in your head.” Perceptively Scott adds, “It’s a similar thing to giving someone listening to the album the ability to conjure whatever they want in their own heads.”

Kylver’s music has coalesced in a very natural way via a pooling of disparate influences. “We’ve all known each other for a long time”, says Jonny. “Myself, Neil [Elliott, organ] and Jim [Bowmaker, bass] have been in various bands over the years. We’ve played so many completely different genres and we just work well together. It’s all very organic. There was no intention of ‘I want to sound like this’. Primarily we’re doing this for ourselves so we’ll just do what sounds right.”

A key element to that sound is the prominent use of Hammond organ. “Neil is an organ player, he’s not a keyboard player who plays organ,” Jonny clarifies emphatically. “He’s a classically trained organist. He plays all the basslines with his feet. It’s an amazing thing to see.”

Classical organ training rubbing shoulders with sludge is one aspect of the progressive outlook of the band. “Myself and Jim really like Mastodon. Melvins. The new Neurosis and Red Fang albums are great. It’s a mix but then we throw in the obsession of buying new toys which helps to create a new sound. We use a theremin live and on The Island. Neil just messaged one day and said, ‘I’ve bought a theremin.’ We were like, ‘What?!’ It’s good fun. Stick in a delay pedal and it’s all kinds of fun all day long,” he laughs, before musing forlornly, “Taurus pedals are on the list but they don’t come cheap.”

There must be challenges to translating this exotic cocktail to the stage, not only from a sonic perspective but physically there are also some logistics to consider.

“We have more happening on The Island than people have hands to actually be able to do,” he laments. “We had to backtrack, splitting parts up between us and seeing what we can leave out. It’s two different experiences. Yes live in 1974 is so much heavier and has more energy and more aggression. I love them for that. When you put a live version on it’s for a different reason than why you put the album on. It’s a lot more charged. A lot of people said we sound totally different live which is what we wanted.”

In 2016, the band were nominated for a Prog Award.

“Getting nominated for the Limelight Award was a massive shock,” Jonny confesses. “When we looked at the other people who were nominated the vast majority were huge compared to us. We’ve just started piecing together riffs for some new material. We need to see where that takes us.”

So conceptual instrumental prog is alive and well and spreading its lore from the north-east. Perhaps people are beginning to embrace this lost art.

“We had one bad review online because we didn’t have vocals so we laughed that off and said we wouldn’t be a very good instrumental band if we had vocals!”

You can’t fault the logic.

The Island is out now. See www.kylvermusic.com for more information.