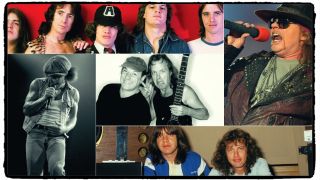 In October 1980, Rolling Stone magazine conducted their first in-depth interview with a band they had previously dismissed as representing an “all-time low” for the hard rock genre. In a sympathetic, insightful article, writer David Fricke noted that despite having been “mercilessly slagged as heavy-metal morons” in the media, AC/DC were fast becoming the most popular hard rock band in the world. The magazine’s sub-editors might have been more sensitive when they suggested that with the burgeoning success of Back In Black, their monumental tribute to late frontman Bon Scott, the Australian band were able to ‘Shrug Off A Death And Rock On’, but Fricke’s article made special mention of AC/DC’s indomitable spirit and relentless work ethic, and the intense loyalty it inspired.

“We just get out there and rock,” said guitarist Angus Young. “If your amp blows up or your guitar packs it in, smash it up and pick up another one. And that’s how it always was with us.”

The past two years have seen this celebrated, almost heroic sense of commitment tested as never before for AC/DC. In April 2014 it was announced that Malcolm Young was “taking a break” from the band he founded in 1973 with his younger brother Angus. Five months on, it was revealed that Young was suffering from dementia and would not be returning to the group.

As fans came to terms with this news, in November 2014 a more sensational story broke, with drummer Phil Rudd being arrested on charges of drug possession and ‘attempting to procure murder’. Though the latter charge was subsequently reduced to ‘threatening to kill’ (a former assistant), in July 2015 Rudd was sentenced to eight months of home detention by a New Zealand judge, effectively sealing his exit from the band. Then on March 7 this year came the bombshell news that AC/DC’s 68-year-old frontman Brian Johnson had been ordered by doctors to stop touring immediately or face total hearing loss, forcing the immediate cancellation of 10 US arena shows and throwing the band’s entire future into question.

Even taking into account the urgency with which this announcement needed to be made – AC/DC were due to play Atlanta’s Philips Arena on March 8 – the statement that appeared on acdc.com on March 7 raised eyebrows. No quote from Brian Johnson was included, and the promise that the shows would be rescheduled later in the year “likely with a guest vocalist” seemed blunt and abrupt even by AC/DC’s notoriously unsentimental standards. This notion was only intensified the following week when, during an episode of his The Metal In Me podcast, US comedian Jim Breuer – a close friend of Johnson – suggested that the singer felt he had been ‘kicked to the kerb’ by Angus Young after 36 years fronting the band.

After visiting Johnson at home in Florida, Breuer declared that the singer was “really depressed”, and disappointed that the decision had been made to effectively announce his retirement without his permission, particularly since a second medical assessment of his hearing had concluded that the potential damage to his hearing was less significant than he had first been led to believe. Breuer told listeners that no one from the AC/DC camp had called to speak with Johnson about his health, and that his regular tour wardrobe and effects had subsequently been dumped without notice on his driveway.

As these comments went viral, causing widespread dismay among AC/DC fans who considered that Johnson’s long‑standing tenure in the group merited a rather more dignified and gracious show of support from bandleader Angus Young, Breuer moved quickly to downplay the ensuing media speculation. The comedian confessed to being “mortified” for the “invasion of privacy” his comments had provoked, and apologised that he had exaggerated a “very intimate, private conversation”.

“All Brian said was, ‘I feel down and want to finish the job and hope it happens!’” Breuer wrote on his official Facebook page. “The rest was ME GOING OFF…”

The furore over Breuer’s comments, however, have now been superseded by the latest sensational rumours surrounding the band, namely that Guns N’ Roses singer Axl Rose has emerged as the frontrunner to replace Johnson for AC/DC’s outstanding US tour commitments. On Friday March 25, the 54-year-old vocalist was photographed leaving the same Atlanta rehearsal facility the band have been using, just days after DJ Jason Bailey told listeners to his Atlanta Radio 100.5 show that a “very, very good source” had informed him that it was “all but a done deal” that the Guns N’ Roses man had signed up to front the band. On the same day, former GN’R bassist Tommy Stinson posted an image of Rose alongside the cover of AC/DC’s 1978 album Powerage on his Facebook page, with the message: “and the biggest balls in rock award goes to… atta boy!!! Go show the kid’s how it’s done!”

Malcolm Young’s son Ross also added fuel to the speculation by posting a link to online reports on his own Facebook page and adding the comments, “It’s true,” and,”He can and he will.” Young later deleted his posts.

While there’s no doubting Rose’s veracity as a long-time fan of AC/DC – Guns N’ Roses covered Whole Lotta Rosie on the B-side of their Welcome To The Jungle single back in 1987, and the most recent incarnation of the group have played Powerage classic Riff Raff live in concert some 41 times since 2011 – the prospect of him stepping into Brian Johnson’s shoes has provoked responses ranging from scepticism to outrage among fellow fans. Leaving aside questions over whether the singer’s inimitable vocal style would be suited to an entire AC/DC set, online debate has largely centred on the jarring contrast between AC/DC’s famously no-nonsense approach to their art and Rose’s ‘colourful’ reputation as a high-maintenance, ‘emotional’ entertainer with a uniquely developed, idiosyncratic approach to both timekeeping and live performances. The idea of Angus Young – and, indeed, AC/DC’s long‑standing crew – tolerating such mercurial behaviour simply defies logic. Then again, in the past Rose has proven himself capable of setting his ego aside when paying respect to his heroes, as was evidenced by his low‑key demeanour at the Freddie Mercury Tribute Concert in 1992, and during his performance with Elton John at the MTV Video Music Awards that same year.

Beyond such concerns, though, the timing of this potential artistic alliance appears to be problematic. On April 1, Guns N’ Roses announced a 20-city US tour to take place in the aftermath of their much talked about ‘reunion’ shows in Las Vegas (April 8⁄9), headlining Coachella Festival (April 15⁄22) and in Mexico City (April 19⁄20). Quite how Axl Rose could juggle rehearsal commitments with both bands in this limited time frame is hard to conceive.

Beyond such logistics, for possibly the first time ever, there’s a genuine sense among the majority of AC/DC fans that instead of auditioning Rose or any of the more popular alternatives to sub for Johnson (Angry Anderson, Jimmy Barnes etc), now would be an appropriate time for Angus Young to simply bring the curtain down upon a band that have nothing to prove to anyone, but have been rocked so hard by misfortune over the last few years.

At the time of writing, however, no one is prepared to go on record to say a single word about AC/DC’s future. Enquiries from Classic Rock to the band’s manager, to their PR and to their UK tour promoters Live Nation were all ignored. And while ticket holders for the 10 cancelled US dates have been offered the opportunity to request a refund, no such offer has yet been made for the band’s European tour, which is due to start in Lisbon, Portugal on May 7 and includes scheduled shows at London’s Olympic Park on June 4 and Manchester’s Etihad Stadium on June 9.

This radio silence – as irritating as it may be to the thousands of people who’ve forked out for flights, trains and hotel rooms, and would like some assurances now – is, perhaps, to be expected. AC/DC have always been an intensely private, fiercely self-contained unit, and even the industry figures closest to them are perpetually held at a distance.

The revelation that Malcolm Young had been suffering from dementia during the Black Ice world tour surfaced months after his family’s September 2014 announcement of his illness, and there was not a single word of advance notice when AC/DC showed up in London on October 3, 2014 for the Play Ball/Rock Or Bust video shoots without Phil Rudd, his absence being later explained away as “family commitments”. Moreover, this is a sensitive, uncertain time for the band, with their future under more scrutiny than at any time since Bon Scott’s passing in February 1980.

But, lest it be forgotten, we’re also talking here about one of the biggest corporations in the music industry. AC/DC’s two-year world tour in support of Black Ice was the second highest-grossing tour in history, taking in $441.6 million in gross revenue, with some 4.9 million tickets sold. In 2015, with the opening leg of the Rock Or Bust tour, the band sold more concert tickets than any other musical artist in the world: 2,310,061 tickets from 54 shows, grossing $180 million. There are currently 12 European shows on the band’s docket, in addition to those 10 US shows yet to be rescheduled. One doesn’t have to pull out a calculator to realise that there are huge amounts of money riding upon the decisions Angus Young is currently mulling over.

But perhaps this isn’t about money, or about legacy, or even about AC/DC potentially setting themselves up for another entirely unexpected phase of their remarkable career, but more a matter of personal pride for a band who’ve always been a byword for dependability and working-class graft. In the autumn of 2008, the writer David Fricke reunited with the quintet to conduct what was, even more remarkably, their very first Rolling Stone cover feature. Back then, it was commonly supposed that the Black Ice album might represent the final act of the Australian band’s storied career, but Brian Johnson offered words of caution to anyone writing off the group he’d joined in the most turbulent of circumstances in 1980.

“They are determined lads in everything they do. Everything,” said Johnson, speaking of the Young brothers. “You can’t change their minds. I’ve tried. If I say, ‘I don’t think we should do this gig, there’s snow on the road, it’s dangerous,’ they say, ‘But the kids got the tickets.’ ‘We could fuckin’ kill ourselves going up that mountain pass.’ ‘But the kids got the tickets.’ I say, ‘I know, we can go tomorrow night.’ They say, ‘Nah, Johivo, they’ve got ’em for tonight.’”

For Brian Johnson, sadly, this looks like the end of the road. For AC/DC? Only Angus Young knows. And right now, the quiet little fella behind some of rock’s hugest riffs is saying nothing.