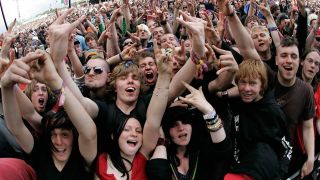 With just days to go until Download, it’s time to start getting into the spirit of things. No, we don’t mean pitching a tent in your garden and getting someone to chuck buckets of water over you while shouting “SLAYERRRRRR!” at the top of your lungs (side note: rain is forecast. Lots of rain). As well as the mighty headliners, there is, as always, plenty of talent both new and established across the four stages. We’ve rounded up some of the best on this year’s line-up for your listening pleasure.

If you’ve got a long and arduous journey to Download ahead with a tent on your back and a crate under your arm, get this playlist in your lugholes to make it approximately 72% more enjoyable.

One of the thrashier tracks from their latest release, Gore, Doomed User stands out as a heavy offering among the album’s fuzzy, melodic post-metal.

Caleb Shomo is an angry man. Beartooth’s second album, the rampaging Aggressive, sees him screaming away his frustrations, and Fair Weather Friend is one of the best tracks to flail around like a mad thing to.

From Ashes To New – Face The Day

Blending nu-metal, electronica and elements of thrash, Face The Day is probably the most shit-kicking track on From Ashes To New’s debut album, Day One.

A ferocious piece of nu-metal from a promising new band with a lot to say for themselves. Their debut album is out just days after Download, but this track from their 2015 EP sums them up nicely.

Wrap your ears around some sludgy riffs from Black Sabbath’s latest (and last) album, which proves they’re still the kings of sinister, brooding, heavy fucking metal.

Twin Atlantic – Fall Into The Party

As well as describing how you might make your entrance to the campsite after a hard day of watching bands, Fall Into The Party is one of the most infectious and upbeat tunes from these Scotsmen.

Every track on Turbowolf’s arty, psychedelic 2015 opus Two Hands has something to offer, but Good Hand has the makings of a festival anthem.

A slice of singalong, bouncy punk from these Exeter newcomers. Now’s a good time to get into them, because they’ve just released their debut album, From Caplan To Belsize.

The Amorettes – Fire At Will

The Motörhead and Girlschool-loving Amorettes’ classic rock riffs have already won them support slots with Black Stone Cherry and Thunder, and Fire At Will is full of their trademark attitude.

First Date is cheeky in the way that a punchy, danceable piece of punk rock is cheeky – not in the same way that some aftershave-drenched bozos might refer to a Nando’s.

You could never accuse Iron Maiden of lacking energy, and this speedy, riff-driven slice of power from their latest, The Book Of Souls, is as Maiden as ever.

Avatar – The Eagle Has Landed

Are Avatar the best Swedish circus-inspired band? Well, they don’t have much competition. The Eagle Has Landed is a strangely compelling look into how a fairground organ might sound like if Satan was operating it.

Forget you’re at Download for a minute and imagine you’re at an inn made of logs with this tankard-bumping, mead-swilling, sword-brandishing ode to Viking metal. Horned helmets optional.

The creepy Swedish rockers prove they can do riffs as well as atmospheric organ-based metal with the chugging, guitar-driven Majesty.

Let off some steam with this ferocious, riff-driven track from Architects’ latest, the despondent-yet-powerful All Our Gods Have Abandoned Us.

Frank Carter And The Rattlesnakes – Devil Inside Me

Relentless, angry, and full of the best bits of British punk; Devil Inside Me is Frank Carter at his riled best.

A debut album is due out in August, but until then, you’ll have to make do with the single Husk, and its mixture of lo-fi, garage-indie riffs and melodies that almost veer into pop-punk.