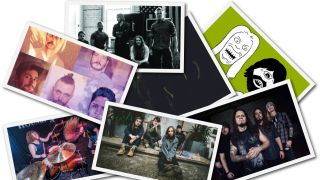 We asked a bunch of Metal Hammer writers to show us the new bands they’re bouncing off the walls excited about in the coming year. Obviously we can’t predict which bands will flourish and headline festivals in the year 2020, but we can tell you that you’re going to want to listen to this dirty dozen over and over again. 2016 is gonna rule.

Dungeon
Malcolm Dome: “Unashamedly mad metal from a young band who nod towards Motörhead and the early days of German thrash from 1984⁄5. But this is no nostalgia trip. They’ve a bristling, chopping energy that comes from a manic commitment to 2016 and beyond. This lot take brick and mortar from the past to build a violently murky wall of sound for today. No compromise, no remorse. Just a speed metal blaze.”

Milk Teeth
Stephen Hill: “Quite how a band this youthful can summon the spite and scorn of the early days of DC Hardcore with the noisiest/ most abrasive side of Sub Pop, whilst remaining so damn catchy is anyone’s guess. But, good god, am I glad they can. After a couple of excellent EPs their debut drops this month, and so begins a career that will surely see them hit the highest of heights.”

The Earls Of Mars
Alec Chillingworth: “You like Mr. Bungle, you like Tool, you love Black Sabbath (obviously), so why aren’t you dry-humping planets and unashamedly twerking to The Earls Of Mars? Harry Armstrong is King For A Day… era Mike Patton spat into a band set on snatching prog back from swathes of Meshuggah pretenders, stamping croons and scathing squawks over a smorgasbord of swing, doom and the meatiest of riffs. Is it cool? Most certainly not. Is it better than most new UK bands out there? Obviously.”

Product Of Hate
Joe Daly: “After cutting their teeth supporting the likes of Lamb Of God and Meshuggah, these head-swivellingly aggressive Wisconsin metallers tear onto the 2016 landscape with a cranium-flattening debut in February. Euphorically violent acolytes of the NWOAHM, Product Of Hate fuel their ambitiously-conceived song structures with paint-stripping riffage and rubberised machine gun tempos. Once the wild-eyed masses get a taste, they could effortlessly slingshot into the next tier by year’s end.”

Fallujah
Tom O’Boyle: “With 2014’s The Flesh Prevails, progressive death metallers Fallujah reached a milestone of real potential, that sweet spot where ambition and inspiration coalesce into something incendiary. A clash of thrillingly intense, complex brutality and searing melody, theirs is the sound of ancient alien warships fighting to the death in the heart of a multi-hued nebula. With a new record due in June, their next evolutionary step could be very special.”

Good Tiger
Thea De Gallier: “If you’ve found yourself missing The Mars Volta at any point, Good Tiger may well fill the void. The self-sufficient art-rockers – including ex-members of Tesseract and The Safety Fire – just crowdfunded their experimental debut, which has more syncopation than you can shake a drumstick at and some deliciously odd lyrics. There must be more weirdness where that came from, and this year, we want to hear it.”

Voodoo Kungfu
Mörat: “Do yourself a favour, go straight to YouTube and find Voodoo’s Kungfu Oriental Dark Aesthetics, and come back when you’ve watched it. It’s only on 373 views, so I’ll know. You back? Wasn’t that fucking awesome? Serious fucking chills, right? That’s insane, more like a cult than a band, and heavy as shit! Wow! Apparently they’re now banned in China and reside in Los Angeles. You’re welcome.”

In Danté’s Eclipse
Ali Cooper: “Just as we have Aiden cruelly prized from our cold, dead fingers, In Danté’s Eclipse emerge to jump in their freshly-dug grave. Hellbent on lacing their furious licks with devilish venom-spitting from frontman Hal Steadman, these five Wolverhampton misfits may be the melodic offspring of HIM and the morbid successors of The 69 Eyes, but they’re in a whole brutally sinister realm of their own.”

Toothgrinder
Adam Rees: “Smashing together boundless imagination with raucous menace, this New Jersey quartet’s debut Nocturnal Masquerade is an astonishingly exciting, fresh and, most importantly, addictive amalgamation of metallic sensibilities and hardcore bite. Metal is calling out for a new act to carry its battle-standard into 2016, and Toothgrinder have all the qualities needed to lead that charge.”

Fatalist
Olivier ‘Zoltar’ Badin: “There’s been an influx of Swedeath revival bands lately and you can always count on Rogga Johansson to keep on churning the same crust-infused, dirty sounding, downtuned riff over and over again under whatever moniker he sees fit. Still, from time to time, newcomers still manage to offer a fresh take on the sub-scene that spawned in the dirty suburbs of Stockholm back in the the ‘80s. Fatalist aren’t exactly what you can call a ‘new’ band though, as they released an album called _The _Depths Of Inhumanity back in 2009 that’s just been re-released by Germany’s Fda Rekotz. But centred around the pair of Neil Burkdoll and former Exhumed six-stringer Wes Caley, not to mention their passion for early Entombed and that famous buzzsaw guitar sound, the result in a much tighter and D-beat free approach that really sets them apart from the legions of Left Hand Path wannabes.”

God Damn
Matt Stocks: “Wolverhampton noise rock duo God Damn set the bar high with last year’s debut album Vultures, and this year’s sophomore record promises to raise it even higher. They were hand-picked by Frank Carter as main support for his headline show at Dingwalls in Camden back in November, and the punk upstart is just one in a long list of high-profile fans that also includes Foo Fighters’ frontman Dave Grohl and acclaimed producer Steve Albini, who oversaw the production of their latest effort. If you like it loud, passionate, visceral and intense, then God Damn are a band to keep a keen eye on – providing your ears can handle the punishment.”

Boss Keloid
Phil Weller: “Progressive sludge metal raconteurs Boss Keloid are as classy as they are crushing. Their second album, Herb Your Enthusiasm is a glutinous feast of seismic riffs, foghorn vocals and a rhythm section that sounds like an avalanche in slow motion. Produced by Conan bassist Chris Fielding at Sky Hammer Studios, it promises to be the catalyst for one hell of a year for the band.”