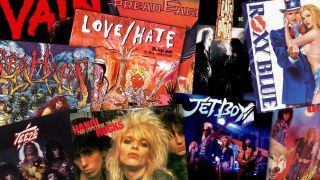 You might laugh at them. Fair enough. But when it comes to partying, getting girls and really rockin’ ‘til the break of dawn, is there anything better than a good glam metal night?

This is especially true in these troubled, shoe-gazin’ times, when Hair Metal bands are the ultimate antidote to boredom and depression. But enough of your old Mötleys, Ratts and Bon Jovis: Dig deeper and go crazy for those 10 unsung hair metal heroes.

Imagine five colourful ghouls dressed like flashy hobos wearing more make-up than Twisted Sister. Then think of a collision between the sharp metal hooks of Ratt’s first EP, the skills of Randy Rhoads-era Quiet Riot, W.A.S.P.’s outrageousness and Crüe’s finest moments: Looking For Action is definitely the undiscovered gem of 1984, a perfect tune that deserves its place on any imaginary Greatest Hits of The Strip.

Those guys were eternal losers. They never got big beyond the three blocks around Gazzarri’s [an infamous nightclub on Sunset Strip], but they were also pioneers on the scene: Blackie Lawless, Izzy Stradlin, Fred Coury and even Nikki Sixx himself all passed through the ranks. They were probably most famous for being captured by Penelope Spheeris for her Decline of Western Civilization Part II: The Metal Years movie, a document that showed the bright side of fame as well as the failure. Of their three albums, 1986’s Don’t Cry Wolf is their best.

Jetboy were actually from San Francisco, but they ruled the Sunset Strip and were local favourites and serious mainstream hopes alongside underground competitors Poison and Guns N’ Roses. Considered unmanageable by the majors, these bad boys were named after the New York Dolls tune of the same name and embraced the legacy of Hanoi Rocks: goth, blues, and in-your-face hard-rock. Feel The Shake coulda been an AC/DC classic.

Frantically seeking the next Guns N’Roses after Appetite… exploded, the major labels cannibalised themselves with fake gypsies’n’outlaws. From the Bay Area, Sea Hags should have been the golden challengers if they hadn’t been even more self-destructive than their glorious peers. Mixing Aerosmith, Dead Boys, goth, psycho and a bit of The Cult in their sleazy rock’n’roll, Sea Hags recorded one beautifully dangerous LP. At the very end of the 80’s, were there any more exciting tunes than Doghouse or Too Much T-Bone? Instead Winger and Nelson shone on Dial MTV.

What happens when two punks from Ohio meet two Japanese rockers? Cats In Boots’ album Kicked & Klawed is a jewel, an irresistible recipe built from AC/DC, Skid Row, Van Halen, Motley Crue & Guns N’ Roses. Not sure what to think about it ? Just feel the electricity run through your whole body as Shot Gun Sally plays. The rest is just pure chemical addiction.

The great Davy Vain is the most intense, sexual and glamorous icon of them all, and No Respect remains a magical moment, when the stars aligned for the Electric Warrior of the 80’s. No success, but definitive cult status: if some hair metal classics can sometimes be used shamelessly, this impossibly cool track is a perfect magnet for girls.

With singer Jizzy Pearl crucifying himself on the Hollywood sign as a crazy publicity stunt, nothing was too dangerous for the best L.A. band around. Four primal junkie screamers who liked to juggle punk, funk, metal, and psychedelia, they weren’t fit for a world dominated by Guns N’Roses and Red Hot Chili Pepper’s Mothers Milk? These freaks did craft a one masterpiece, Blackout In The Red Room, which featured thrilling tunes aimed squarely at both street gangs and high-school groupies.

With Spread Eagle’s self-titled debut album featuring cover art designed to look like a patriotic US veteran’s patch, these five guys from Boston missed their moment. And that’s a bummer: the opening Broken City is a sleaze anthem, a very aggressive attack designed to kill any bright-teethed poster-boy.

Despite all the money and means injected by Geffen, Roxy Blue’s debut Want Some? LP bombed in the charts despite fierce ambition, fantastic hooks, and a little help from Jani Lane. Take in the Warrant and Poison-ous choruses, but also the old school Van Halen tricks and some true classic-rock, with a nod to authentic southern roots.

If Vince Neil hadn’t crashed sticksman Razzle to death in a run-for-beer sports car accident, Hanoi Rocks would surely never stopped their cruise to imminent American super-stardom. Without Hanoi Rocks, there’d definitely be no Guns N’ Roses and, er, no Saigon Kicks. Today Michael Monroe embodies the whole underground David Johansen-meets-Iggy Pop peroxyde Godfather. But oh boy, how he could have been HUGE…