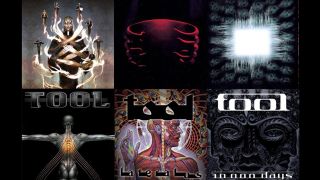 Today marks the day that many people thought may never come as Tool, metal’s most subversive and elusive band, put their entire back catalogue on all music streaming services for you to enjoy.

Now, strictly you should be going through each album in its complete form as nature intended, but we know there are a few heathens out there that insist on listening to the tracks in no particular order.

We think you’re mental, but here are the best ten Tool songs as a starter for you to listen to in isolation. Then play the albums in full you loon!

Let’s start off with an easy one, taken from the live section of their debut Opiate EP, Cold And Ugly is actually pretty straightforward a rock song featuring the atypical quiet-quiet-loud-quiet dynamics of the day.

It offers few clues as to how progressive they would become, but does showcase what a staggering vocal range Maynard James Keenan has.

The band’s first real hit of any description, Sober has become a classic of the Undertow era thanks to its dark and mournful mood, creeping guitar parts from Adam Jones, stifling and propulsive rhythms and, once again, Maynard’s haunted howls. A key first step.

Although this takes much of the staccato guitar chops that made a band like Helmet so influential, Swamp Song glides and swings unlike any other metal band of the time ever could. One of the best signifiers from Undertow that Tool were going to be a very, very special band.

4. Hooker With A Penis – Aenima

About as straightforward and blunt as Tool get. Hooker With A Penis is what happens when you feel like making a metallic punk rock song, but are just too damn creative for it to come out as anything other than a swirling, spite filled, expletive ridden masterpiece.

The title track of 1996’s worldie of an album, with Keenan railing at the state of society and indulging in an apocalyptic fantasy over oddly timed chopped guitars and a Danny Carey drum freakout halfway through that will melt your tiny mind.

If you’re one of the most stunning records in the history of recorded music, you better kick things off right. And The Grudge is some opening statement. A jarring, battering, beautiful prog epic that sets up what is about to come perfectly.

At a combined nine minute plus running time this is where you need to start investing a bit of time. But it’s worth it for the doomy dirge to scalpel sharp riffs and back of this song.

Adam Jones plays a blinder on guitar, but, as ever, the real thrill is hearing all four members lock in and creating a cacophony of brain altering sonic brilliance.

You probably know this one right? It’s a Grammy winning anthem and the closest thing that an album as endlessly deep, rewarding and impenetrable as Lateralus has to a single.

Justin Chancellor’s opening bass is the spark here, and Tool feed off of his tones until they grow Schism into something utterly remarkable.

Tool openly spoke of how much they had been enjoying Meshuggah around the time of 10,000 Days release. Here is where the influence is most pronounced, with all manner of time signatures colliding and some polyrhythmic riffing the Swedes would surely have been proud of.

Some dude called Justin Bieber turned many on to this song. LOL! Seriously though, as a... ahem “singer” himself, Biebs clearly knows a decent set of pipes when he hears them.

The opening accapella vocal from Maynard is worth the admission price alone, but don’t think he’s the only draw here. Quite how Danny Carey plays three rhythmic patterns at once we’re still trying to work out 13 years on.