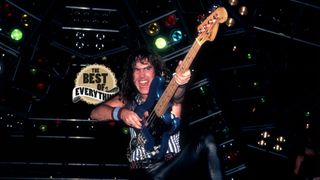 If you really want to get inside a musician’s head and understand the music that makes them tick, you should always check out the cover versions they record. Iron Maiden band leader and bassist Steve Harris’s love of old school rock and prog is clear to see from the eclectic songs he’s chosen to pay homage to…

An undeniably sexist 1978 tune by Aussie band Skyhooks, Maiden’s 1980 retread featuring vocalist Paul Di’Anno is the last Maiden song to feature guitarist Dennis Stratton. Steve Harris hated it, but producer Tony Platt pulled off a great punk/Lizzy mash-up. And any tune with the lyric “Commando raid on the Lebanese border/Sergeant Anita gives the order” works for us!

Offbeat Dutch rockers Golden Earring are a Harris favourite, and while Maiden’s version of this 1975 tune omits some of the more eclectic orchestration of the original, it still takes Maiden into unfamiliar territory with its deliberately mid-paced, oppressive and downright malevolent feel. One for connoisseurs maybe, but great all the same.

Another big Harris favourite, Brit proggers Jethro Tull recorded Cross-Eyed Mary on their 1971 classic, Aqualung. Maiden take the borderline medieval sound of the original and turn it into something altogether more muscular and Maiden-esque. Bruce Dickinson delivers a lung-busting vocal performance full of deliberately hokey schlock-horror, but there’s no arguing that it works.

Maiden actually recorded two different versions of this 1974 belter by USA rockers Montrose. This is the earlier of the two, live from the Marquee in 1980, and is a perfect snapshot of Maiden’s early, more ragged and punky sound. Paul Di’anno’s earthy vocal approach gives the song an urgency that’s simply undeniable.

A faithful run-through of the Thin Lizzy classic from 1976’s Johnny The Fox album, highlighting the roots of the intuitive twin-guitar interplay of Adrian Smith and Dave Murray that forms such an important part of the group’s sound. This is Maiden paying homage to the band that was a huge inspiration and pulling it off with ease.

Released as part of a European DVD single for Different World, this rollicking romp through a 1971 prog thrasher by Dutch outfit Focus is a real deep cut, but one that gets our vote every time. With drummer Nicko McBrain thrashing the life out of his kit and adding a number of daft and delightful ad-libs into the mix, this is a total delight.

Another Harris fave, UFO’s 1974 Doctor Doctor has been Maiden’s intro tape since forever, so it’s no surprise the band finally interpreted this mid-paced rocker during the Blaze Bayley era. The much-maligned singer puts in a decent effort here. It’s hard to cock up such a classic, though, so you wouldn’t expect Maiden to make a Horlicks of it, would you?

Harris reaches back into his patchouli-oil past to resurrect a song originally recorded by prog outfit Nektar in 1972. In actual fact, this is a mash up of two Nektar songs, Crying In The Dark and King Of Twilight, with both numbers given a Maiden facelift and joined together into a sprawling, enthralling metal/prog beast.

Powered by a truly insistent beat from Nicko, this is an adrenaline-packed rush through a 1974 tune by Brit prog outfit Beckett. Featuring a number of unapologetically OTT rhythm changes and audacious drum fills, you can feel the band loving every minute of their work here. And check out ‘Arry’s last-gasp bass runs. Finger-lickin’ good!

Originally recorded in 1970 by British hard rockers Stray, this is a turbocharged run through what was originally a long, complicated, more ethereally-tinged hard rocker. Stray’s version doesn’t have the musical competence that Maiden bring as ambition outweighs ability. Maiden’s version does away with the harmony vocals to toughen things up and deliver something very different.

The 11 best Iron Maiden songs based on history