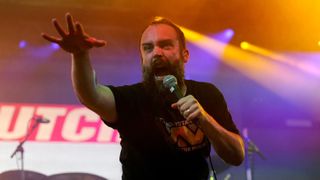 When Metal Hammer sat down with Clutch frontman Neil Fallon, we found the band coming to the end of their tour cycle for the latest album, Psychic Warfare. It’s been almost a year since the record was released, and in Neil’s eyes, that means it’s nearly time to get working on the next one.

“We are thinking about the next album,” he tells us. “We’re going to tour until the end of the year, then take a bit of time off and exhale. We’ve been writing some riffs here and there, but I think in the new year we’ll really step it up and focus on writing songs – as many as we can, as quickly as we can.”

Clutch have honed their punchy, bluesy, Southern rock to perfection throughout their 25-year career, so it might come as a surprise that when we asked Neil for the records that have been most influential for him, he included prog and even hip-hop in his selection. Here are his 10 selections…

“This was an album of my father’s. He listened mostly to folk music like Fleetwood Mac and Emmylou Harris. But this was San Francisco acid rock from the late 60s. I remember one song in particular called Help, I’m A Rock, which is a Frank Zappa song. I remember listening to this one at an early age and being terrified. But I wanted to listen to it over and over again, it had all the typical acid rock things you’d expect, stereo panning and effects. I think that opened up a propensity for liking scary music, not necessarily aggressive, but weird.”

“Nowadays there are other Led Zeppelin records I like better, but that was the one I got into first. It was one of those moments where I remember the first time I heard it, it was on a Sony Walkman outside my high school, hanging out with the bad kids. The Battle Of Evermore is probably my favourite Zeppelin song. It never gets old.”

“I like this for two reasons: they were doing something no one had ever done before, and they were a local band from DC. I think I took it for granted that every city had a band like that, and I remember listening to this in high school every day then getting to see them when I was about 16 years old. I completely split my wig. I’d never seen anything like it. Bad Brains raised the bar so high for what live music should be. Rarely do I see things that come close.”

“Tom Waits’ ability to write lyrics as a story really opened my eyes. It doesn’t necessarily have to be emotions about the big break up or what have you, and I decided to try to be like him in some ways, to tell stories. Even if they don’t make a lot of sense, there’s still some kind of plot or characters. I like songs that are infused with characters.”

5. Pink Floyd – The Dark Side Of The Moon

“I think Pink Floyd’s The Dark Side Of The Moon is one of the albums we’ve heard so much that we tend to grow a little deaf to it, but it’s the perfect record. The lyrics match the music and the music matches the lyrics. I remember listening to it also at a very young age, and that was one of the very first records I remember closing my eyes to. I still do to this day, which says something.”

6. Public Enemy – It Takes A Nation Of Millions To Hold Us Back

“Another soundtrack to high school. I gravitated towards that because starting Clutch, it was easier for me to be rhythmical than melodic. Chuck D was, and still is, one of the best rappers out there. He had a big influence on Clutch, you wouldn’t think so on the surface, but he did. This Public Enemy record influenced Clutch in a big way.”

“I picked this Robert Johnson compilation up at a truck stop somewhere in the Midwest, driving the van. The first track on there was by Skip James, Devil Got My Woman. I listened to it at 3am driving down the highway and it scared the bejesus out of me. I tried to learn that song on guitar and I couldn’t play it, and it ended up becoming The Regulator. So had I not stopped at that truck stop and picked up that cassette, that song may not exist, and that’s a big tune for us.”

“Once again, I remember when I heard Black Sabbath for the first time, it was at a high school bonfire party around Hallowe’en, it was just the perfect setting. It was like the beginning of every cliched teen horror movie you could imagine. I remember being frightened, but wanting to hear it again.”

“I’m not a big fan of prog, I think it gets a little too self-indulgent, but I listened to this record incessantly when we did The Elephant Riders, and I think it influenced the lyrics quite a bit. To this day it’s still my favourite King Crimson record.”

“This Funkadelic record, I think, bridges a lot of gaps between rock and funk and blues, and did it in its own unique way. Clutch listened to this record incessantly when we did our first tours.”

Clutch’s album Psychic Warfare is out now through Weathermaker Music.

Clutch play Rockville this weekend, which takes at Metropolitan Park in Jacksonville, Florida.

Get your tickets now.