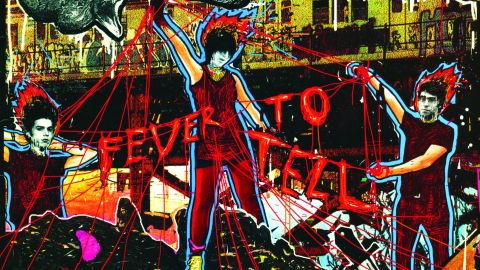 Impossible to disassociate from the times; stoned interviews, dresses covered in beer, Williamsburg bar tables set alight; punch-ups at 3am; a fierce riot of love and excitement and explosion, exclamation marks covering everything in sight. Life is nothing if not a spectacle.

Karen O – a whirling dervish on vocals, emotion punctuated by breathy spaces and faux disdain, like Riot Grrrl and Big Black given 20 doses of whatever – was the party queen. Brian Chase – a meticulous withering one-man assault on drums – put the rock into the art. Nick Zinner: Brutal thunderous minimalist guitar.

Critics claimed that Fever To Tell, Yeah Yeah Yeahs’ 2003 debut album, was short on emotion and… uh… songs. Critics were wrong. It had as many songs as the Ramones’ debut – and that is a shitload of songs, let me tell you. Rarely did the pace let up, from the insanely great Date With The Night to the greatly insane Pin to the percussive melodrama No No No, and when it did (Maps or closer Modern Romance) it felt emotional.