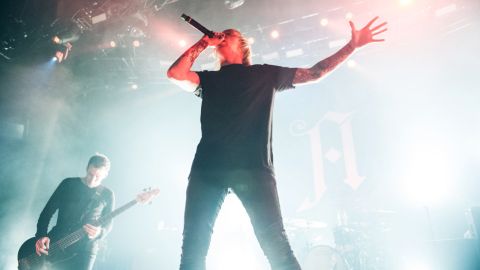 This past Saturday (14th March) the Brighton metalcore mob Architects bounded into Camden Town for their largest headline show to date. Over 3,000 rabid fans packed into the Roundhouse and this is what happened…

At this point it feels a bit like pointing out that the sky is blue, but when you see the Buffalo five-piece live it really cements the fact that this band are fucking brilliant. A constant rush of excitement as Keith Buckley oozes the sort of charisma that makes him one of the coolest guys in rock. The band effortlessly switch between all-out ragers like Underwater Bimbos From Space and party anthems like The New Black with ease. Furthermore, while a lot of the bands of their ilk struggle to be their best outside of a sweaty club, ETID own this far bigger stage, making it their own and making the fact that they don’t headline venues like this themselves one of the world’s biggest mysteries.

This Is Another Great Step Forward For Metal

Playing their biggest ever show, rounding off their biggest ever tour, it’s weird watching Architects tear through the likes of Dead Man Talking and Alpha Omega on this stage – but in a very good way. While they’re obviously not the only heavy band to play this venue, a few years ago not many people would have banked on these kids who play blistering, technical metalcore (with very little commercial crossover), headlining such a big stage.

They More Than Prove Their Worth

Perhaps one of the reasons Architects are here over a lot of other metalcore bands is that while plenty of ‘em can churn out breakdowns, not many can load their songs with the emotional payload Architects can. Their music takes frustration and sadness and uses it as a powerful weapon of defiance. It’s hard not to get truly wrapped up in shouting along to the likes of the “You can’t stop me giving a fuck!” of Naysayer, and “You fucking pigs!” of These Colours Don’t Run.

It’s Far Much More Than Part Of The Day Job

That aforementioned strong emotional presence in the band’s music is never clearer than tonight. It’s immediately apparent how much of their heart and souls this band have poured into their music as Sam Carter talks between songs. Openly admitting that he’s trying not to cry, something you can see from his face and the tears of joy that are desperate to push themselves past his eyeballs, make this show extra special. While many bands deliver the “How much our fans mean to us” speech, it’s obvious Sam’s words are one hundred percent genuine.

“This is the best show that Architects have played in ten fucking years!”

These are the words Sam bellows towards the end of the show, and it’s highly unlikely that anyone present will disagree. When you take into account that a few years ago that a lot of people had written this band of, not to mention a host of personal problems behind the scene, it’s genuinely heart-warming to see this gig happening. Proof if ever it was needed to never give up and persevere, it acts as a truly happy ending for the up and down story that has been Architects. The only thing is this isn’t the end, if anything it’s the beginning of a whole new chapter for this band – and it’s awfully exciting to see what comes next for Architects.