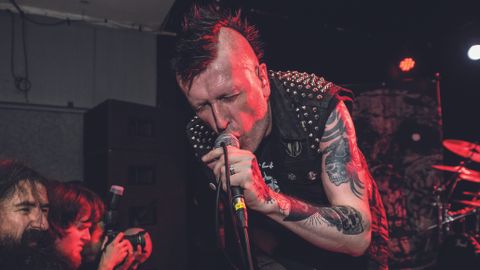 Cambridge sonic terrors TERRA [7] have found a last-minute stand-in bassist who shares their Cousin Itt aesthetic – hair, instruments and a lot of noise. The trio make a huge racket that’s akin to Sunn O))) and Bolt Thrower jamming with Burzum. Germany’s IMPLORE [7] are crunchier and sharper but with less low-end pummelling. Elements of metalcore meet blackened death metal and crust, with a furious delivery. Built around a core of Paradise Lost’s lead guitarist Gregor Mackintosh and former Solstice/My Dying Bride six stringer Hamish Glencross, VALLENFYRE [8] have a serious pedigree, and you might be forgiven for thinking that their joint venture is a vehicle for dour, downbeat dirges. Instead they hit that late-80s sweet spot where UK crustpunk met European thrash – in other words, death metal before it became polished. Discharge and Celtic Frost riffs abound on tracks like Messiah and Dead World Breathes, as guitars churn like they’re cutting through steel. There are also a few doomy moments that could almost pass for unreleased 90s Paradise Lost demos, but they’re balanced by furiously filth-ridden moments that recall cult death/grind outfit Repulsion. For the crowd, this is no night of retro-fetishism; it’s a rediscovery of death metal’s most resonant source, and even better, it’s all topped off by the hilarious stage patter of the ever-sarcastic Gregor.