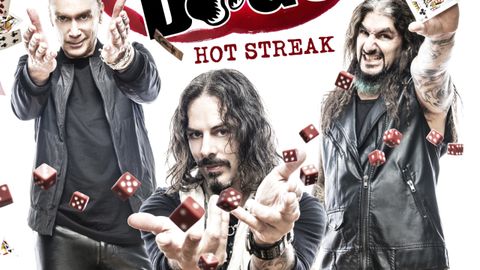 Like so many supergroup hook-ups over the last decade, the Winery Dogs didn’t exactly exude permanence. Richie Kotzen (Poison, Mr Big), Billy Sheehan (Dave Lee Roth, Mr Big) and Mike Portnoy (Dream Theater) are restless rockers, but something clicked: their debut album exceeded the sum of the parts and their gigs proved the chemistry didn’t dissolve.

So two years later, here they are again. Hot Streak lives up to its name. It also takes a broader musical approach, without compromising the band’s core style.

After the fiery, jazzy riffs and thunderous double bass drumming of the opening Oblivion, there’s a funky smear over the groove-laden Captain Love and the vibrant title track.

Kotzen’s voice still veers between Sammy Hagar and David Coverdale, and his guitar explores the delights of flamenco and the wah-wah pedal. Meanwhile, Portnoy and Sheehan are at that telepathic stage of finishing each other’s phrases. More like a band than a project, then.