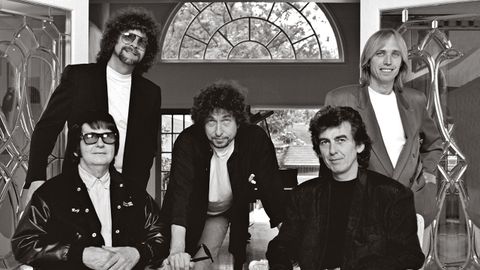 Supergroups are traditionally awful things, with nobody bringing their finest work to the table and everyone displaying their worst traits and not their best. There are exceptions, of course. And nobody in the late-80s would have expected The Traveling Wilburys to be one.

Their cornerstone members were Bob Dylan, who had spent the entire decade releasing albums which people liked even less than the one before, and George Harrison, who was admittedly on his first career up since All Things Must Pass, having put his music in the hands of Britain’s number-one Beatles tribute act, Jeff Lynne. But the group’s first collaboration – with Lynne, Roy Orbison and Tom Petty – was the infectiously wonderful Handle With Care, a song that seemed to refer to its singers’ heritage as much as anything else.

The secret of the Wilburys’ debut album (Traveling Wilburys Vol. 1) is that it sounds like five mates having fun, but lacks any self-indulgence, ego or crap songs left over from solo albums. On songs such as Dirty World, Dylan sounds like he’s enjoying himself, while Orbison’s Not Alone Any More was clearly the record he’d been trying to make since 1964. Lynne’s production is both 80s-contemporary and sympathetic. And if at times the song veers all over several shops stylistically (Margarita sounds like Dylan doing the Gypsy Kings doing A-Ha), then it doesn’t matter, as the principals’ sheer chutzpah and talent knits it all together again.

The Wilburys were never really meant to be a group, despite talk of tours, and most of their other work was spread out in duo or trio versions of the band on various solo records by each member. It was as if, even though they’d great success as a unit, the Wilburys’ real purpose was to revitalise the careers of each member as a solo artist.

Perhaps that’s why the energy of the group was short-lived and also why the wryly named follow-up, Traveling Wilburys Vol. 3, released in the wake of Roy Orbison’s early death, is a stodgier collection. Planted deep in a rather chunky Lynne production, it lacks the lightness and charm of the debut. But on 7 Deadly Sins and the charity single Nobody’s Child (included here), the sense of freedom and the lightness returns. This collection contains the two albums, a DVD collection and the usual booklet guff.