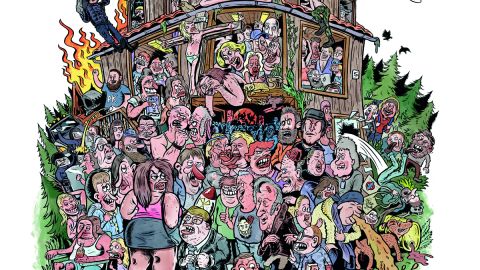 Considering the simplicity of its formula, it’s incredible how many bands manage to fuck punk rock up these days. Coming screeching and spitting out of the Norwegian suburbs, The Good, The Bad And The Zugly (or GBZ for short) have already established themselves as one of the most ferocious and skilled of modern punk bands, but Misanthropical House is such a joyful demonstration of snot-encrusted mastery that it’s hard to imagine a future where this band aren’t held aloft as beacons of insolent excellence. Whether clattering along at full pelt on short, sharp stabbers like Mindlessness and Going Nowhere Fast or delivering immaculate hardcore anthems like International Asshole or Vig Bak Meg Satan, this is exactly the kind of punk rock album that metalheads will embrace and that, Satan willing, will get the effusive acclaim it deserves. Up the punx!