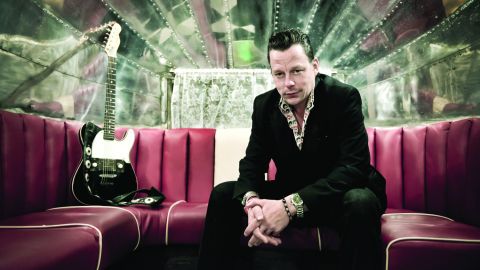 Ian Siegal - All The Rage

There aren’t many reasons to salute President Trump, but at least his hateful reign has pushed Britain’s most fascinating bluesman back into the studio after three live albums.

Ian Siegal’s first all-original set since 2012’s much-decorated Candy Store Kid, All The Rage is an album of two halves, both excellent. The four songs written solo by the bandleader were “born of concern and fear”, and you can hear it, from the ominous drum tattoo of Eagle-Vulture to the Latin-themed Ain’t You Great? (‘They want to kill your neighbours, they’re gonna eat their brains’).

Elsewhere, his collaboration with other writers prevents All The Rage from banging on. Sweet Souvenir, written with producer Jimbo Mathus, is heavenly vintage soul, framed as a conversation with the barman, furnished with a drop-to-your-knees improvised guitar break. Lighter still is Sailor Town, its bob-and-weave hook carrying Siegal’s flippant snapshot of a roughneck waterfront where ‘some of my friends got locked up, most the girls got knocked up’.

If you know Lopez only as the ragged holler behind Supersonic Blues Machine, then Tell The Truth is a good entry point to the Texan’s wider talents. The guitar work runs with the Lone Star State’s sizzling lineage, but it’s Lopez’s unvarnished world view that marks him out, whether he’s riffing on hand-to-mouth life (Cash My Check) or the greasy pole (Never Came Easy To Me). (7⁄10)

With their butchered instruments and bastardisation of genre, this Missouri four-piece prick up jaded ears. During Choke Cherry Tree’s cultural trolleydash, Akira Kurosawa combines fuzz-blues with an orchestral sweep, Trapeze pairs wheezy accordion with a choir of angels, Life Of Crime nudges into hip-hop and Sketchbook is a pop hoedown. It’s the best kind of identity crisis. (8⁄10)

Chicago great Luther Allison was cut down in his prime; his youngest son Bernard might just be hitting his. Recorded raw in Tennessee, Let It Go is a light-footed, energetic set from a bluesman who can be deeply funky (Backdoor Man) and jazzy (Kiddio), but always brings it back to home base (for example on Blues Party, which imagines an afterlife jam session with his fallen heroes). (7⁄10)

On his hundredth birthday, this tribute underlines the late slide king’s still-unfolding legacy. The stars are out: Billy Gibbons and Warren Haynes revitalise Mean Mistreatin’ Mama, while Tom Jones knocks out a lusty Done Somebody Wrong. With Mollie Marriott purring on My Bleeding Heart, the torch is being passed. (7⁄10)